Work has continued on mark 1 TSO 5057.  The floor was lined with 4mm ply and the Marmoleum (lino) has been laid. 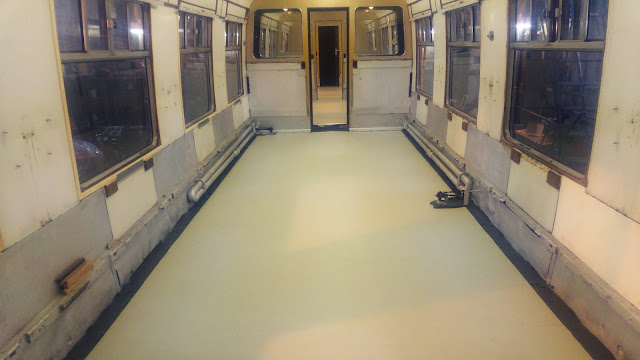 A new set of mouldings have been prepared for the window surrounds. 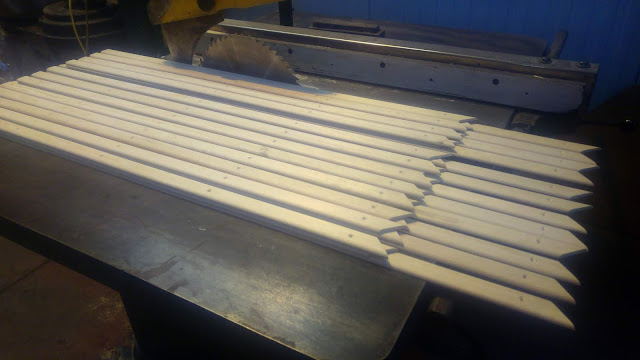 A few of the windows have had the moulding fitted, this will have wood dye and varnish applied.  The seats which have returned from the upholsterer and can be seen through the window awaiting their turn at being fitted. 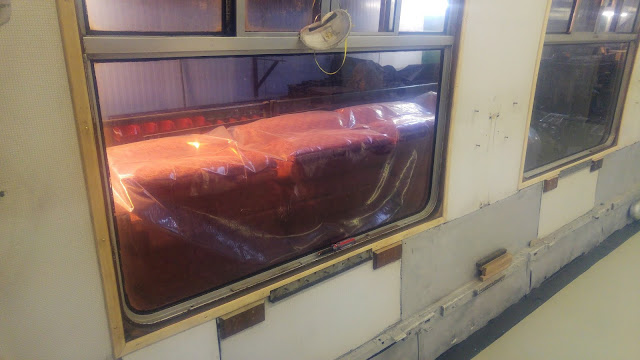 One of the skirt panel joints was cracking badly owing to rust underneath.  The filler has been cut back and rust preventative applied. 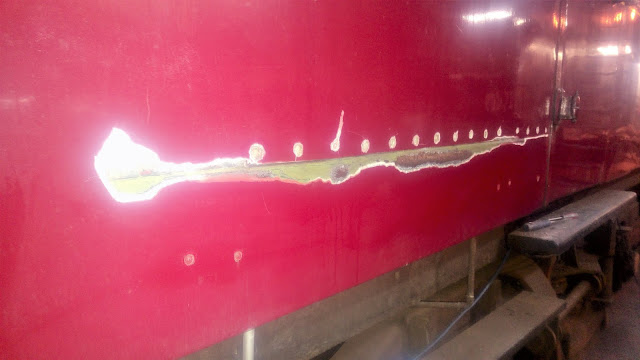 On RU 1936 a few jobs have been completed.  This is the curved vestibule door from the saloon end.  The exterior side has been rubbed down, painted with primer, undercoat and is seen here in top coat. 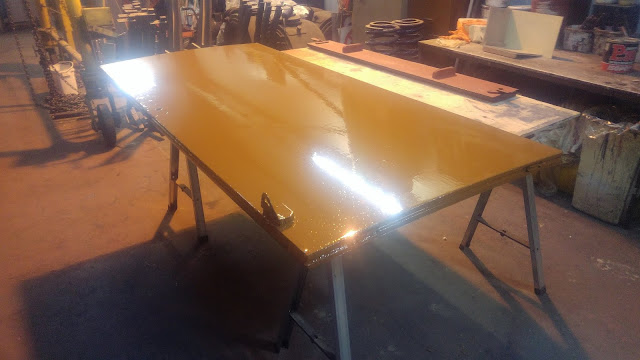 The battery boxes have had new doors made. 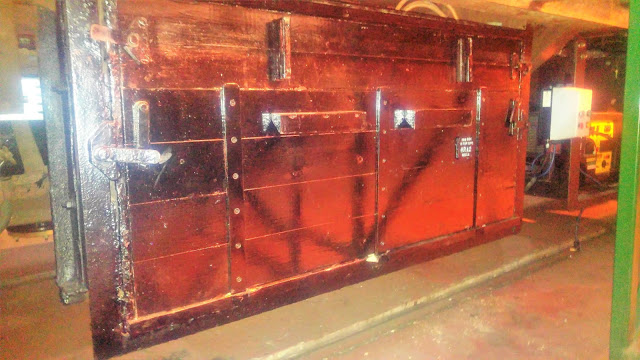 Posted by foxontour at 20:13 No comments:

RU 1936 work progress.
The high capacity batteries have now been fitted.  This is one of two boxes showing the shelf built into the box to allow two levels. 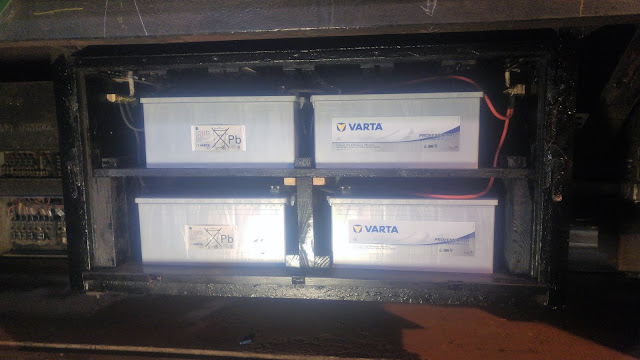 A wider view to show the two battery boxes. 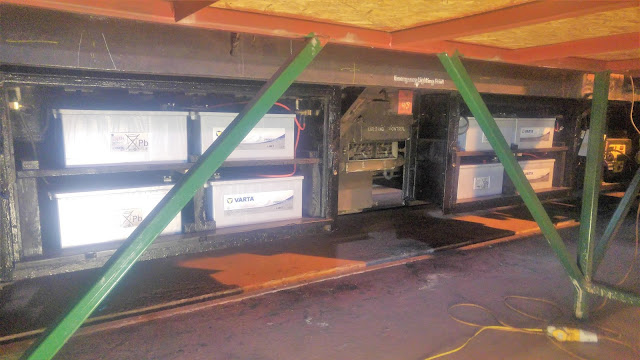 One of the problems to over come was the balance pipe between the two water tanks.  previously made of plastic, a more robust arrangement was needed.  The solution was this stainless steel flexible pipe arrangement. 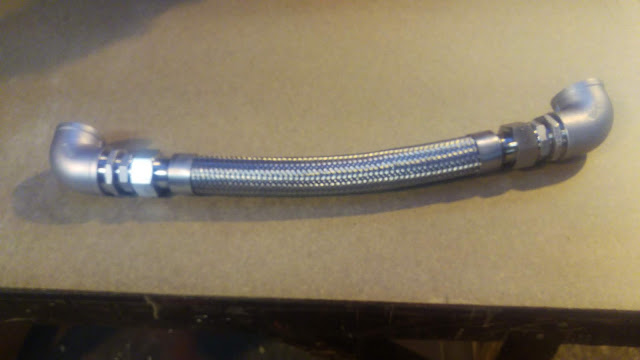 The interior panelling of the saloon has progressed along both sides. 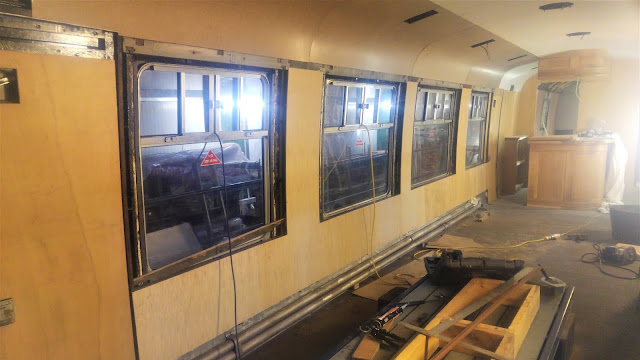 The bar has now had the flap and access door fitted. 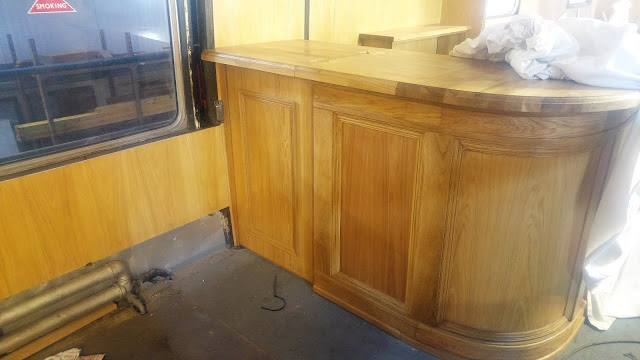 A close up of the flap and door. 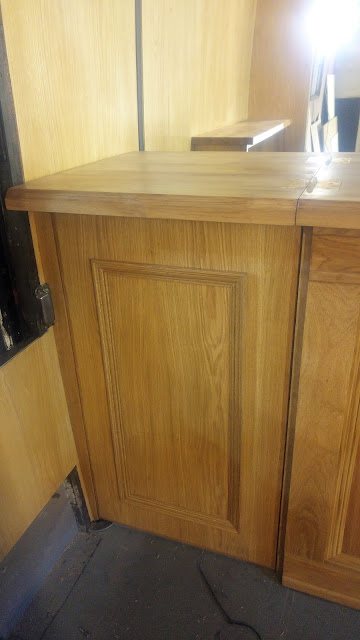 The bar back unit close up. 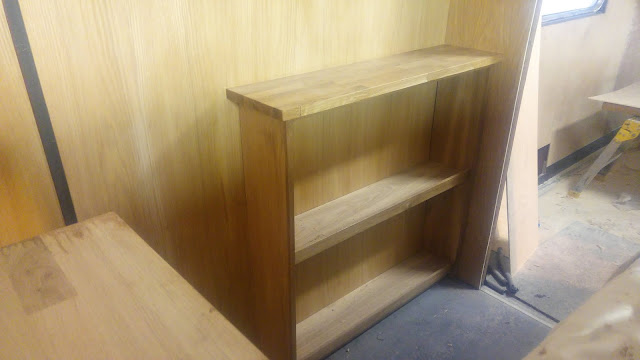 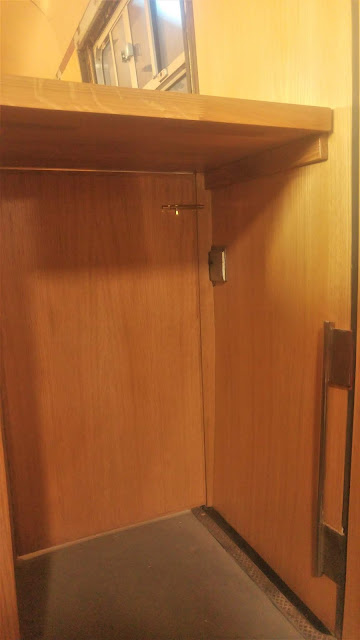 The interior panelling has got as far as the end of the coach and is proving to be a big jigsaw puzzle, mainly because of the length of time since we took it apart.  The rear panels have been covered with oak faced ply and varnished, they are laid out to dry inside the saloon. 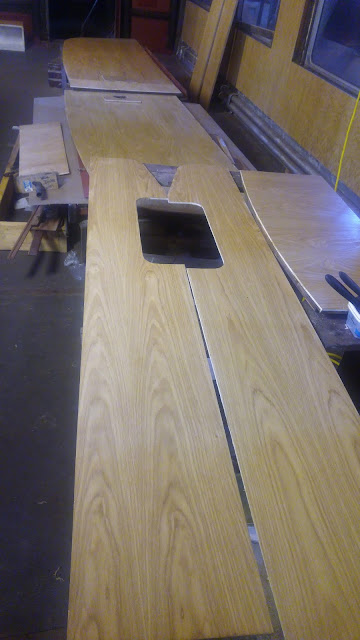 There are two wings at the entrance to the vestibule, these are pictured leaning against the side windows. 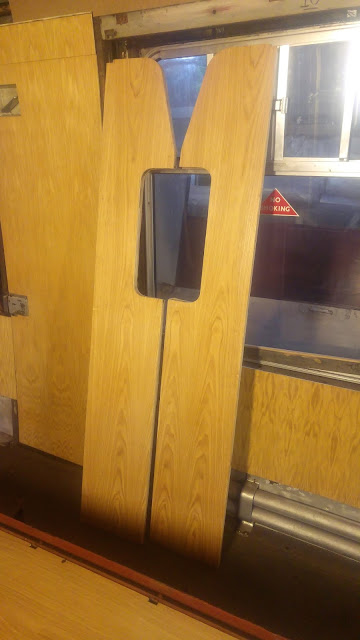 The frame at the vestibule end has been repaired and fitted. 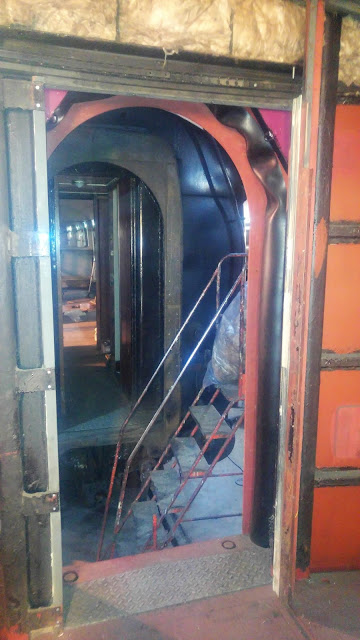 The sliding door gear has also been cleaned and re-fitted. 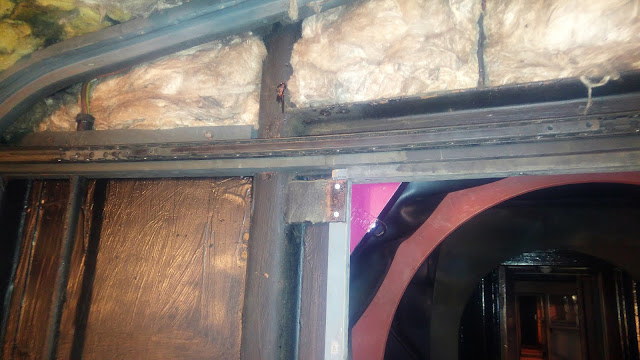 A major project that we have taken on during the winter break is the re-upholster of mark 1 TSO 5057.  For some time now the seat cushions were becoming more and more thread bare and were in need of attention.  The coach is pictured here outside the carriage shed attached to mark 1 TSO 5060 which has the same seat material.  Any seat cushions in 5057 that had been recovered and were still in reasonable condition were exchanged with worn ones from 5060 to improve the interior of that vehicle. 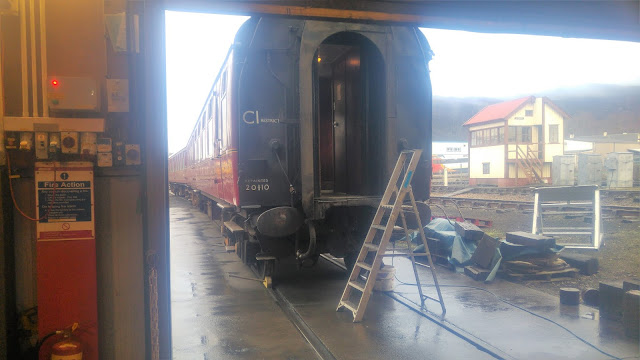 The seat backs and cushions having been removed await the attention of the upholsterer. 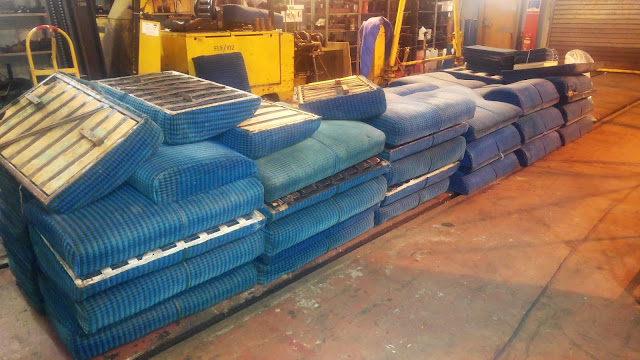 The wooden trims from the top of the seats have been sanded and have received a coat of varnish. 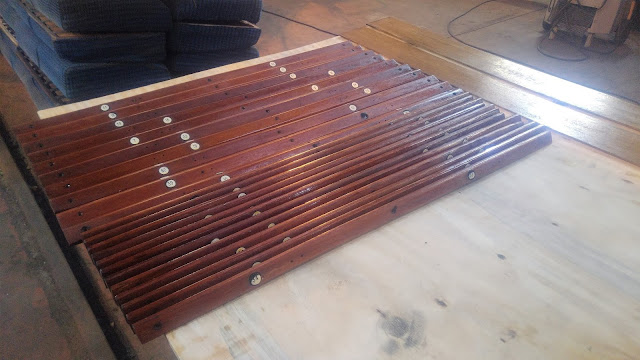 The interior of the coach after the seats had been removed.  The frames are being removed for repairs as they are in poor condition. 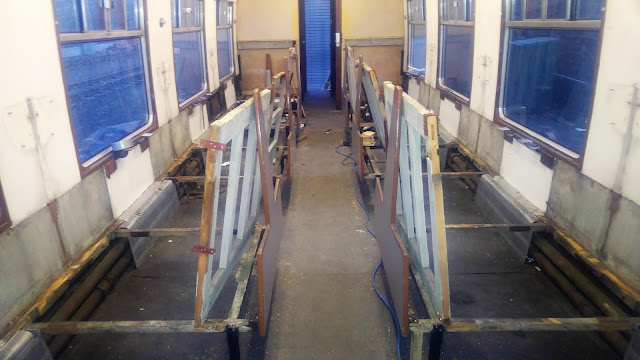 Removal of the seats revealed an earlier seat material, possibly the original fitted when it was built.  This red and black striped material was known as red candy stripe. 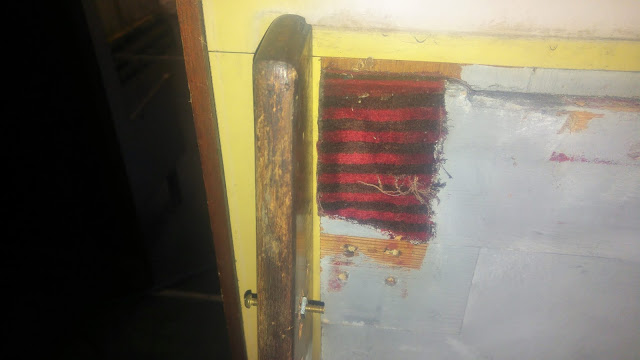 A small area of four tables being separated from the rest of the coach by a bulkhead had green and black candy stripe material.  The seat sides were fitted with green Formica, whereas the rest of the coach had grey Formica and the bulkhead showed signs of where hinges for a swing door had been fitted.  Research into this suggests that this area was the smoking compartment. 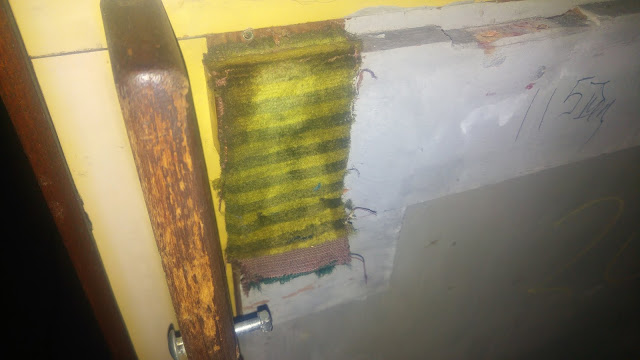 The interior after the seat frames had been removed.  We have run into further problems, the lino was lifting under the tables, dirt had got underneath which when cleaned out, in trying to re-fix the lino it broke owing to being brittle.  The whole coach will have to have the lino renewed.  The next problem is that two of the steam heat pipes had cracked and have to be removed for repairs.  Finally the window rubber is perished and will need replacing. 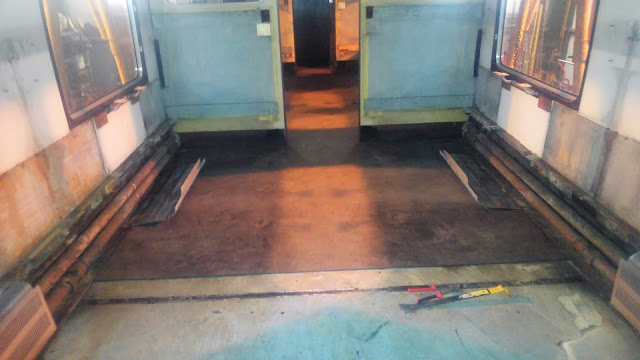 This end of the coach has had the old lino lifted, after cleaning it will be covered with a sheet of 4mm plywood to provide a good base for the new lino. 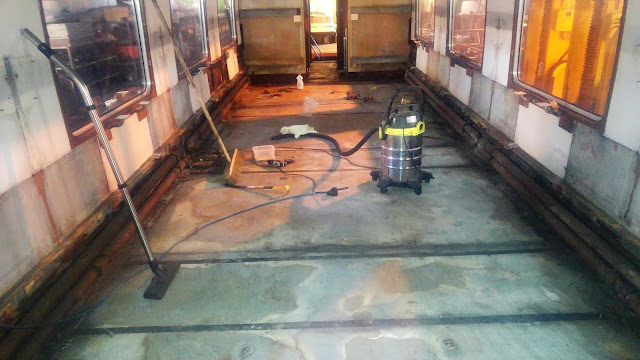 Not a brilliant picture but this is a steam heating on / off valve which controls the pipe on the left.  The bend on the pipe on the right is the end of the next steam heat pipe arrangement, its valve will be at the end which is out of sight away to the right.  Steam enters via the valve along the small pipe, flows around the pipe and exits via the pipe which goes through the floor.  The casting into which the entry and exit pipes attach is where the cracking has occurred. 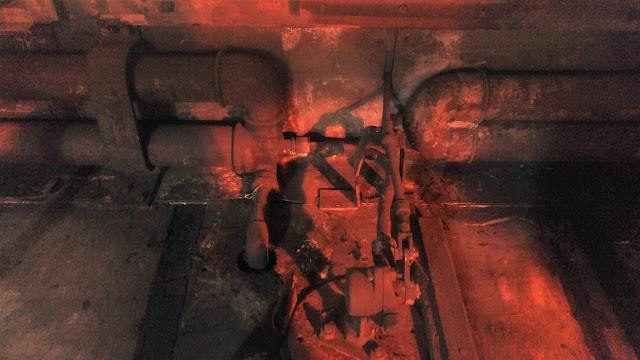 The seat frames set out in order along the floor awaiting their turn for repair. 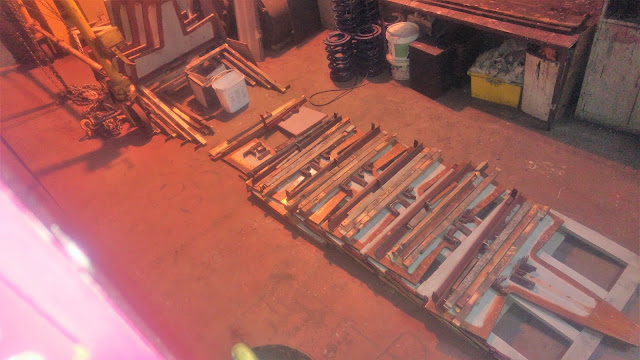 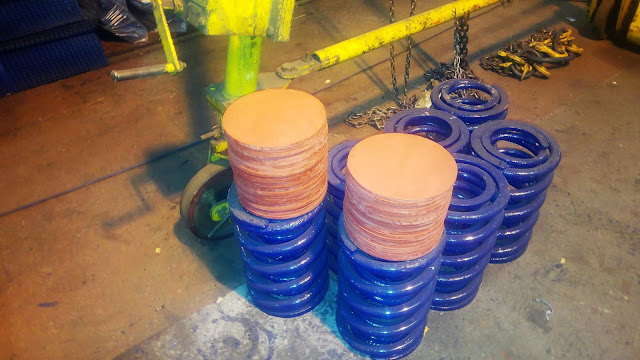 A square version which is used as a packer for the equalisation beam on a commonwealth bogie. 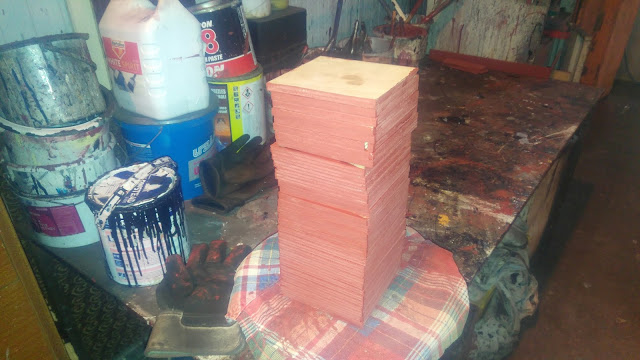 Posted by foxontour at 21:03 No comments: