The saloon end reconstruction continues.  Here we see that the left hand panel as well as the panel above the gangway have been welded in place. 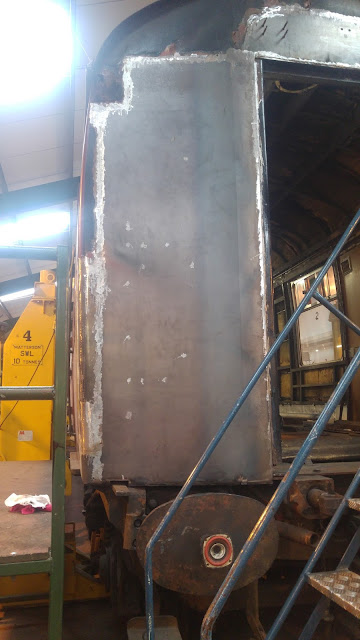 The corridor connection face plate has seen some attention.  This is the rear showing all of the renewed studs, these studs hold the rubber bellows in place. 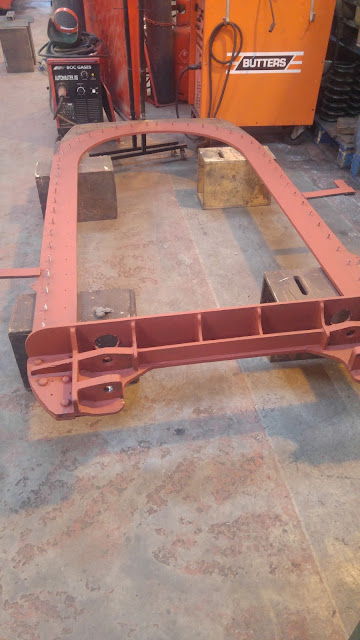 A close up of the studs in place.  The rubber goes over the studs and then a steel strip moulding is secured on top to hold it in place. 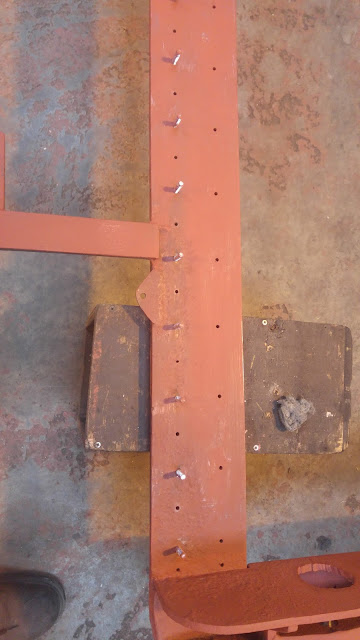 A patch has also been welded into the curved panel at the left hand corner. 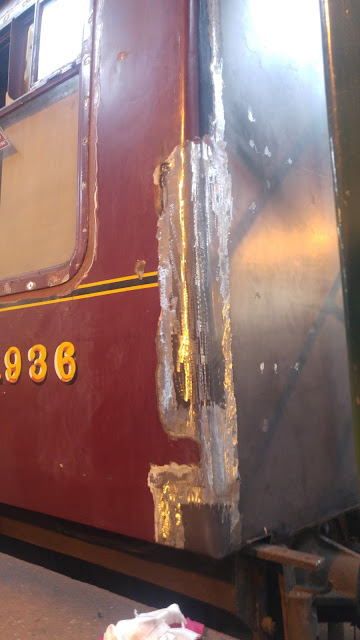 John Crook working on a steam heat coving panel at the top end of the workshop. 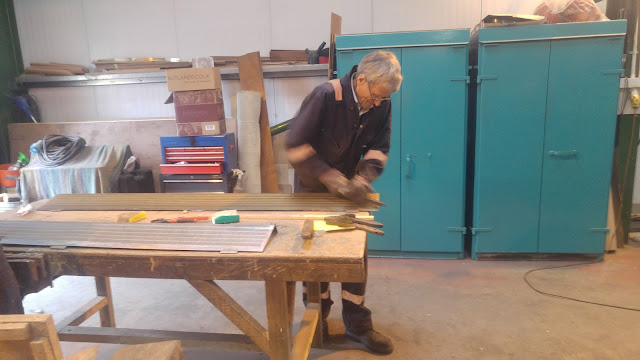 This shows the kitchen end corridor connection door, which has been refitted.  Behind the door we can see the bulkhead and doorway to the former staff cloakroom.  To remove it this bulkhead had to be cut into two halves and glued back together when putting it back in. 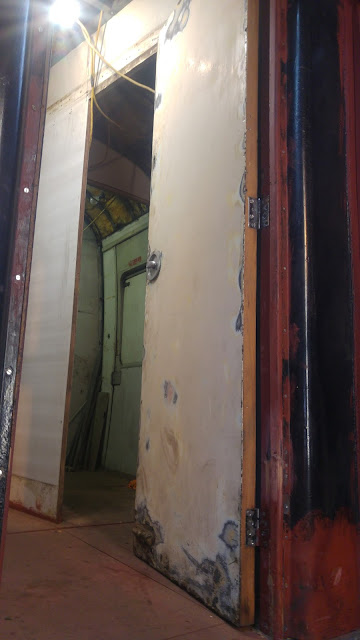 The cut line above the doorway, a piece of moulding over the top and you would never know it had been split. 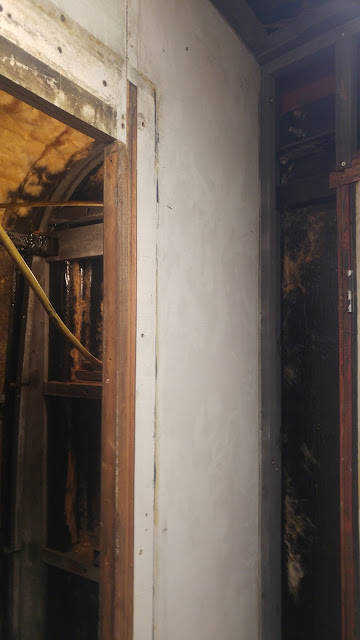 This is the inside of the former staff cloakroom.  The picture has been taken from where the three lockers used to be.  We would be looking out from inside one of them if they were still in place.  The window on the left has been plated over and will have a new bulkhead from left to right, roughly in the middle of the former window.  Beyond the new bulkhead will be shelving for storage, this side of it will be an alcove to house the new fridges. 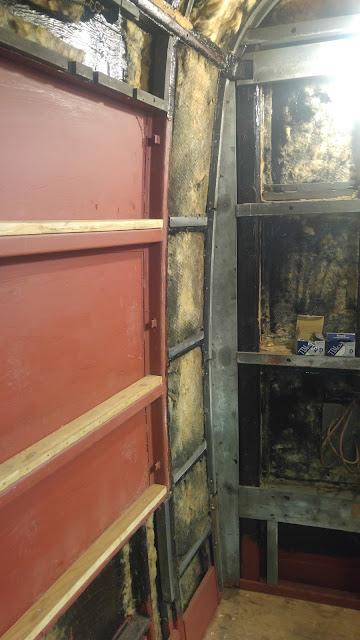 In our previous sessions on this vehicle we thought that all of the floor repairs had been completed.  However another area of rot in one of the steel top hat sections was found under the door mat section.  Here Jack has removed the floor panel and is stepping down through the hole onto part of the chassis. 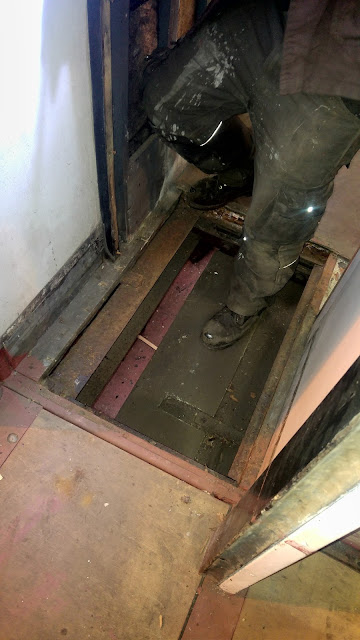 Also during an earlier session on this vehicle, all the windows were removed by detaching the frame from the body.  These were then refitted using an adhesive similar to that which modern car windscreens are fitted with.  In doing this job it was found that the rubber holding the glass to the frame had perished and had been replaced with silicon in places.  A new rubber extrusion was sourced and 113 metres purchased which will replace the old completely. 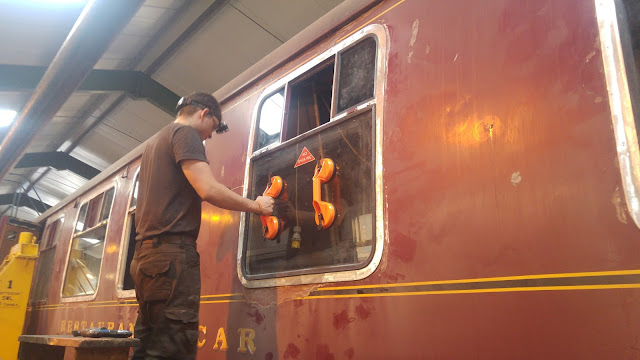 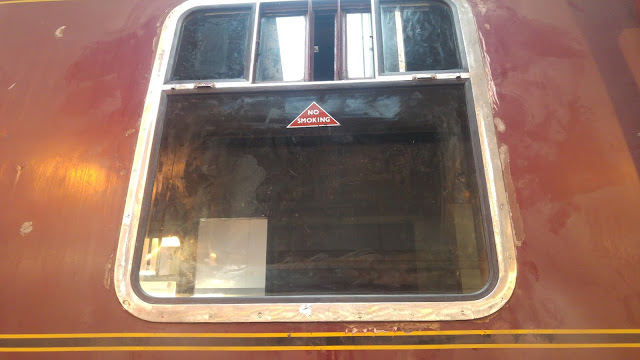 Whilst the glass was removed, the frame had all of the paint removed.  To finish, the frame surface will have to be built up with a high build primer to smooth the surface. 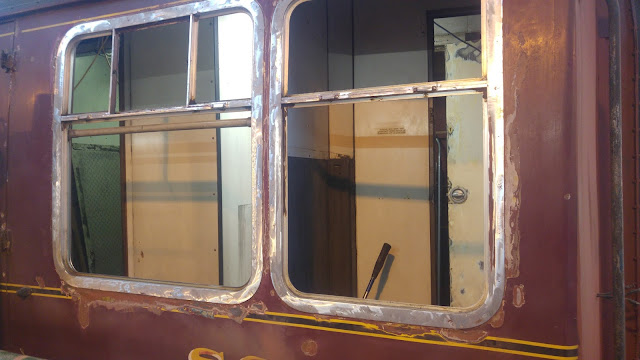 A pair of sliding window frames on the bench undergoing refurbishment. 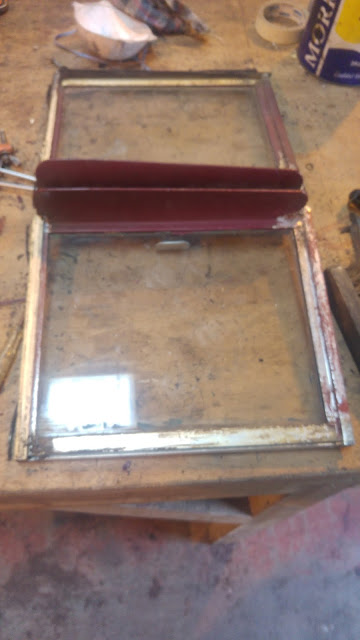 A sliding window after it has received some attention. 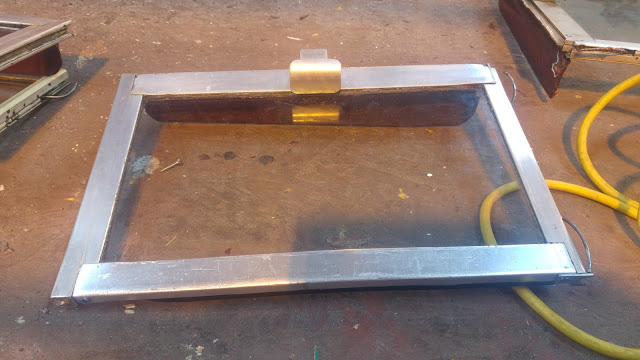 The aluminium checker plate at the kitchen end vestibule has been refitted. 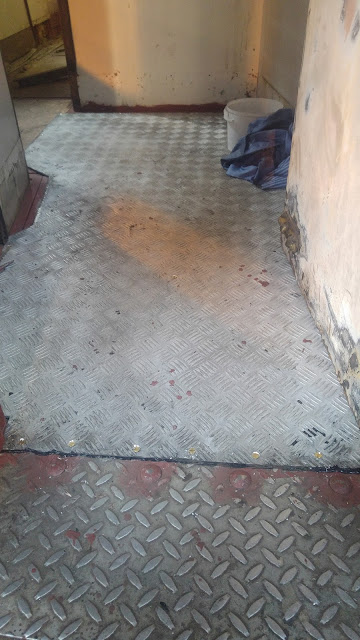 Also in the workshop is commonwealth bogie number B10.  This was removed from under its coach owing to having wheel flats.  It is now having a complete overhaul, brake gear, springs, axles etc.  Here Jack and Benny are heating up the pins that hold the swing links in place, prior to removal. 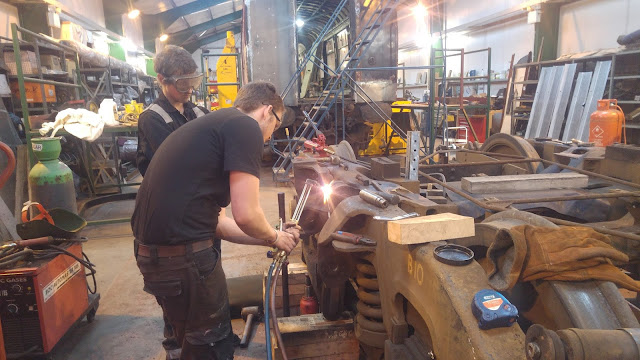 Also in the shed is North British shunter, D2774.  The carriage shed is once again acting as a paint shop. 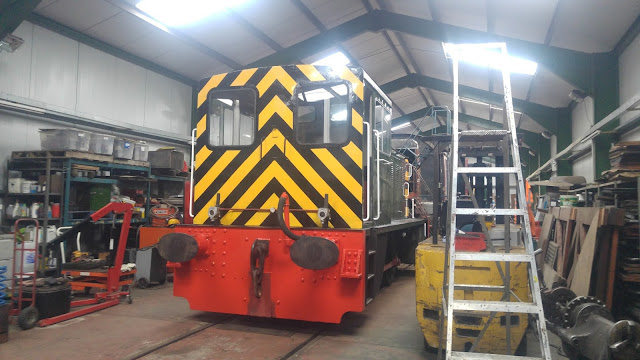 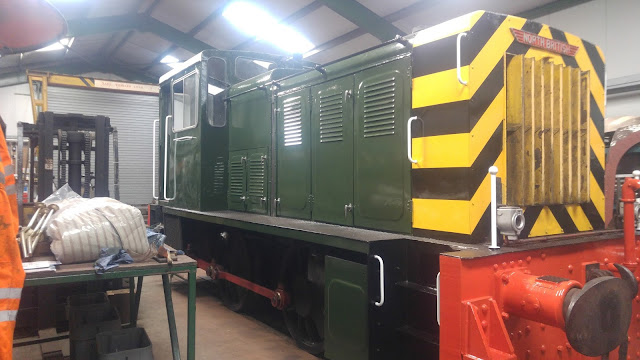 Posted by foxontour at 21:35 No comments: