Work continues on the re-building of the toilet end and the stripping down of the parcel area end.  On Wednesday 25th the coach was taken to the turntable, turned around and returned to the shed.  This was to make it easier to work on the parcel end which is proving to be far worse than the toilet end was.﻿ 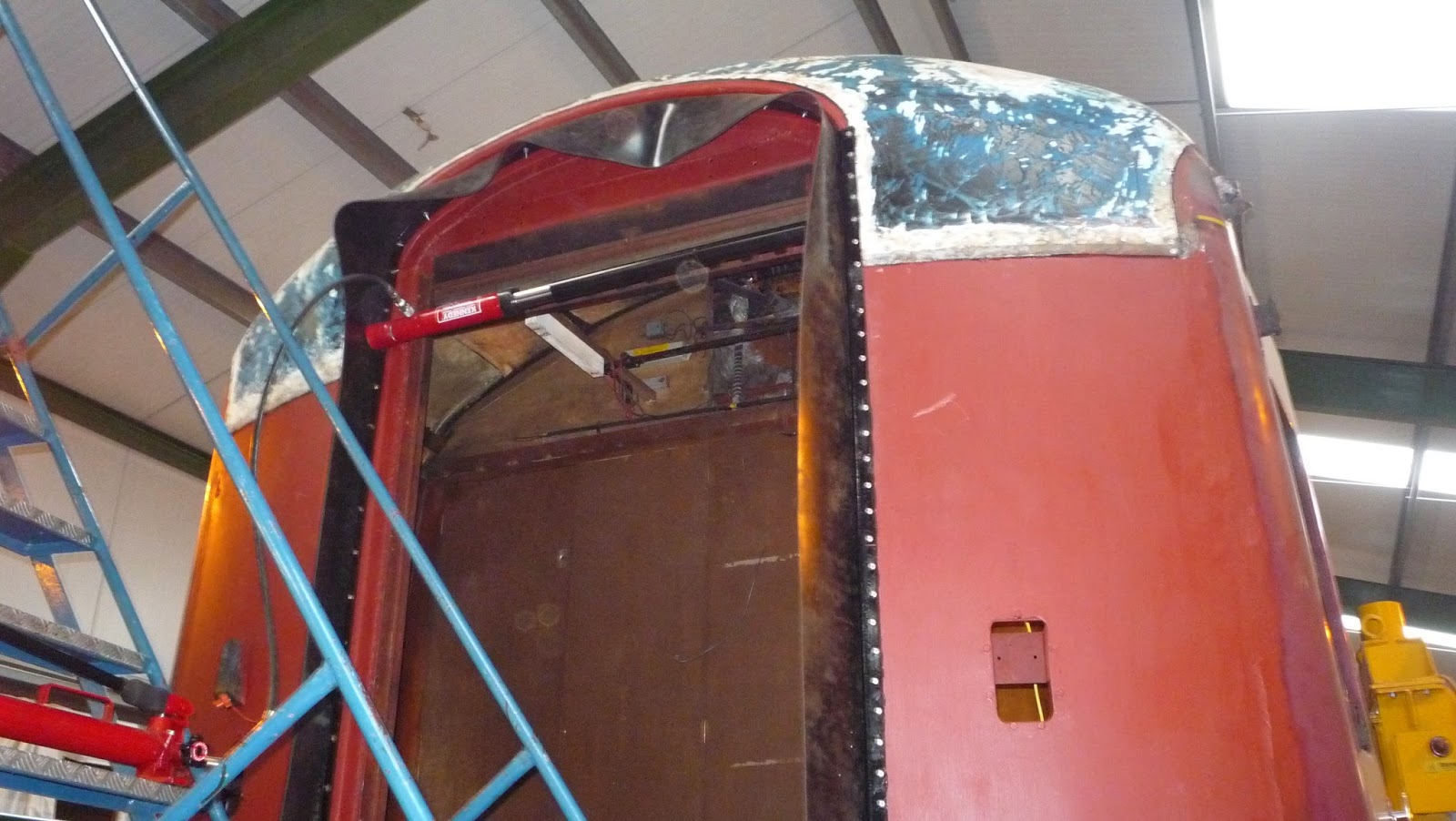 Fitting the rubber diaphragm to the coach end,  The hydraulic ram has been used to press home the steel angle capping piece. 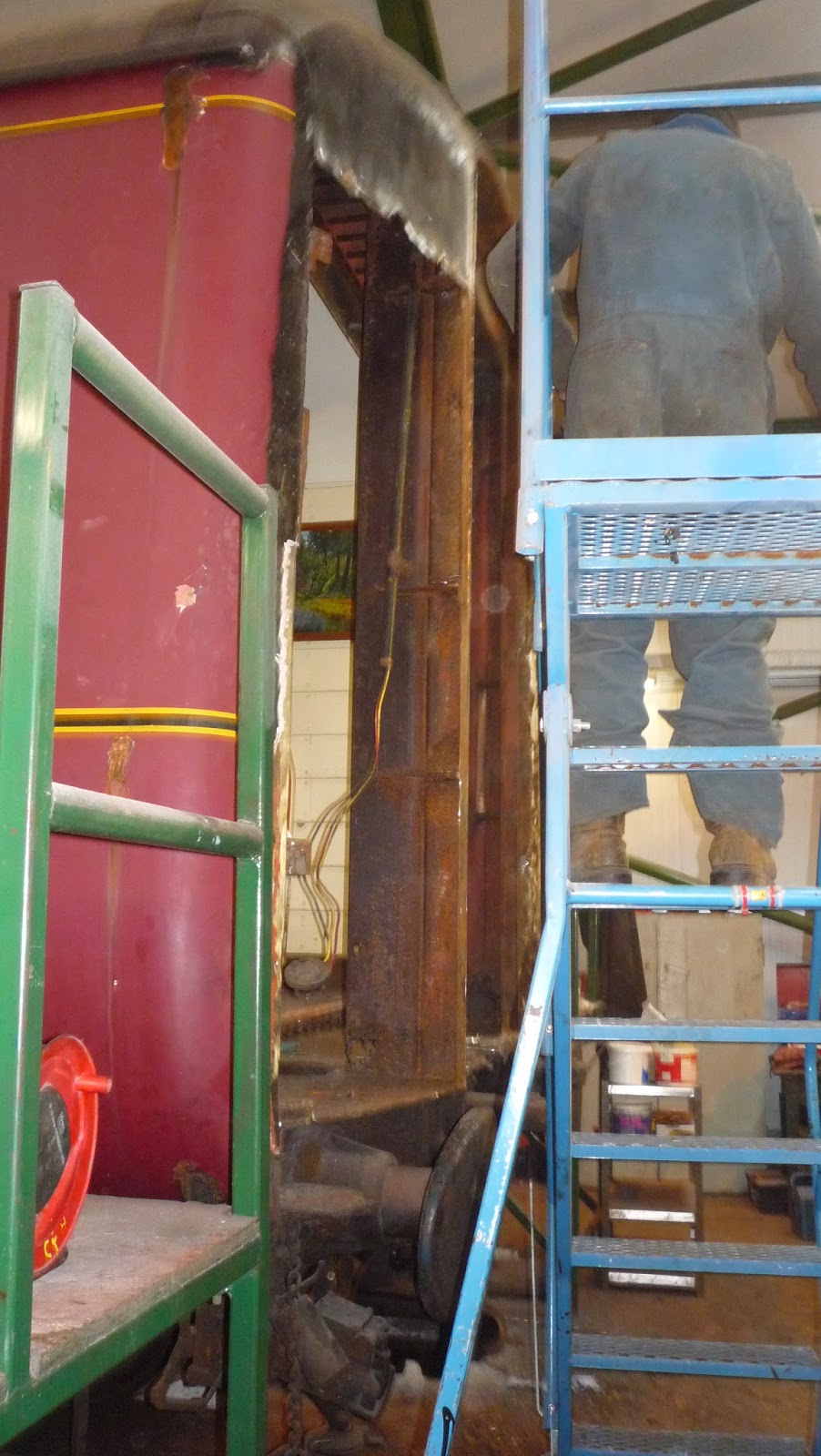 The other end continues to be stripped down 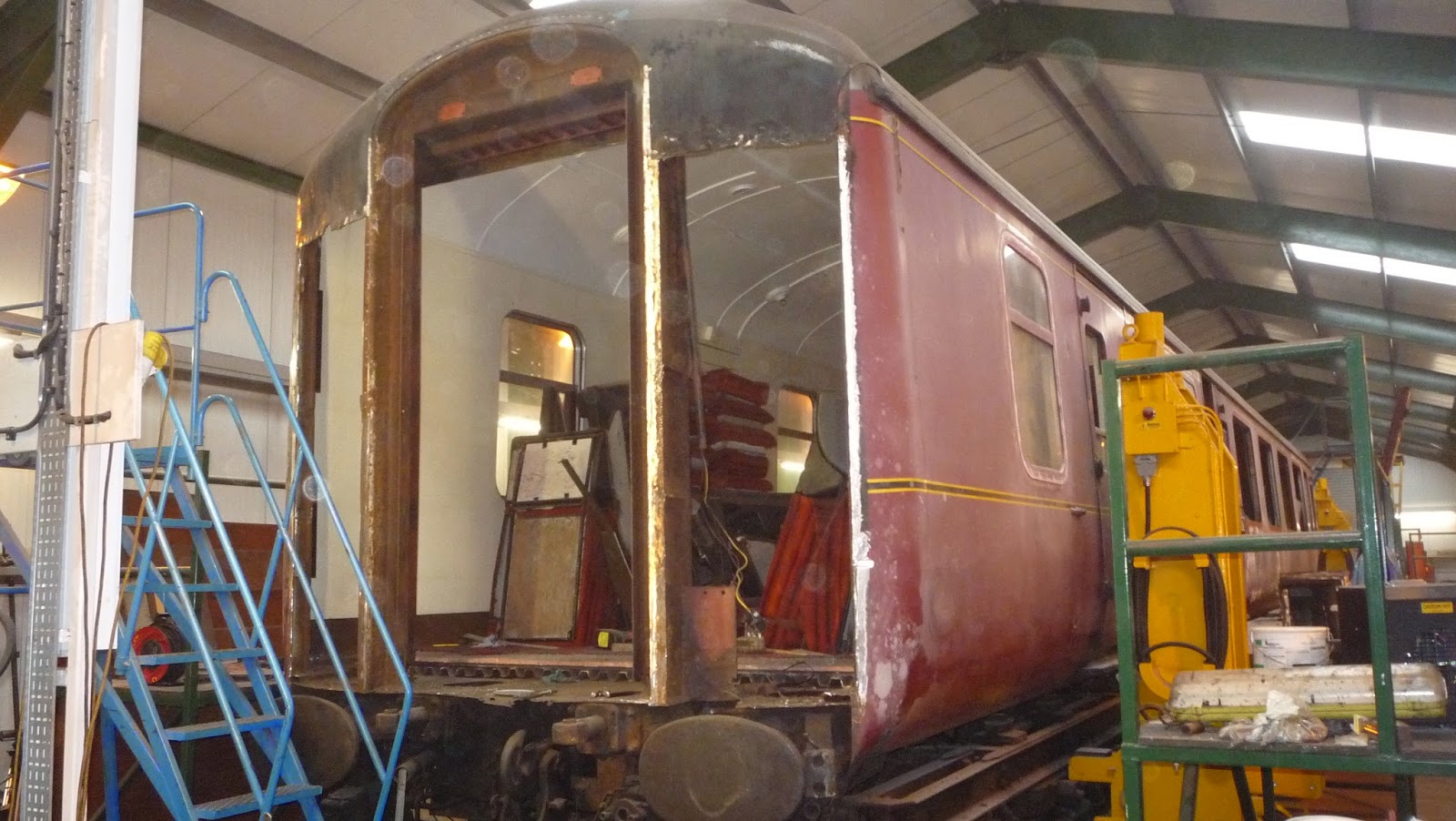 All of the panels have now been removed. 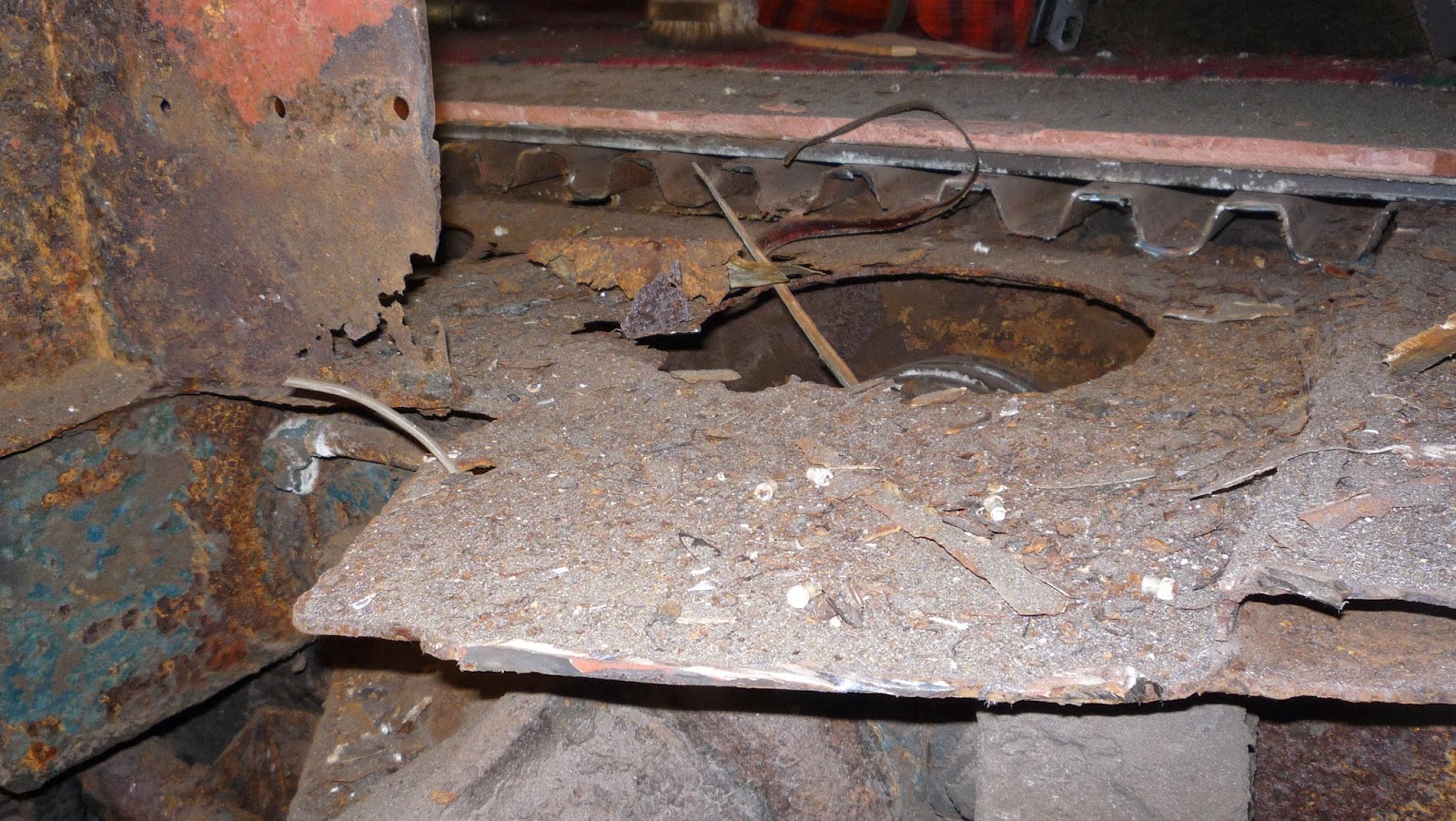 The floor at this end is in a dire condition. 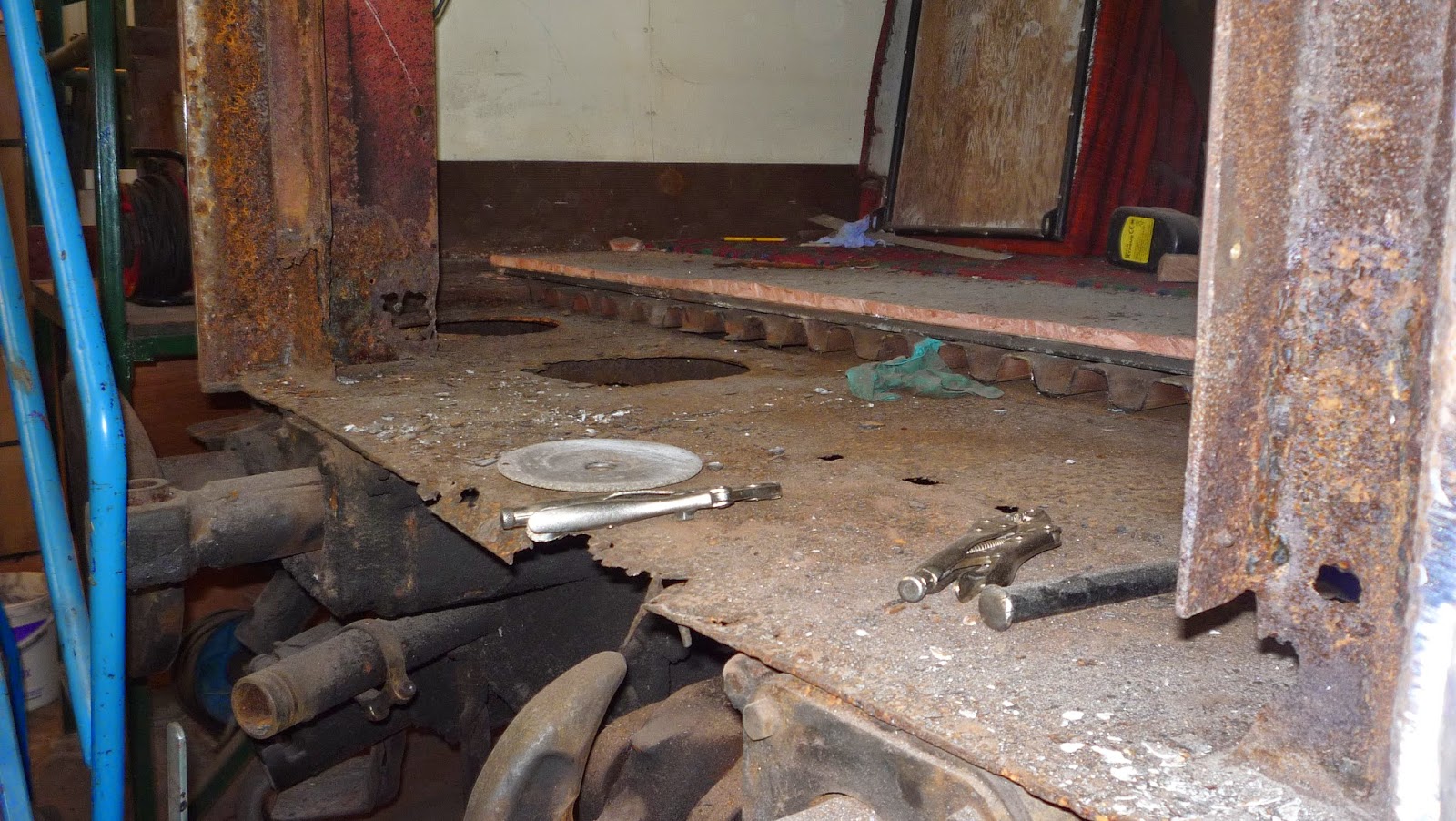 More views of the parcel end of the brake. 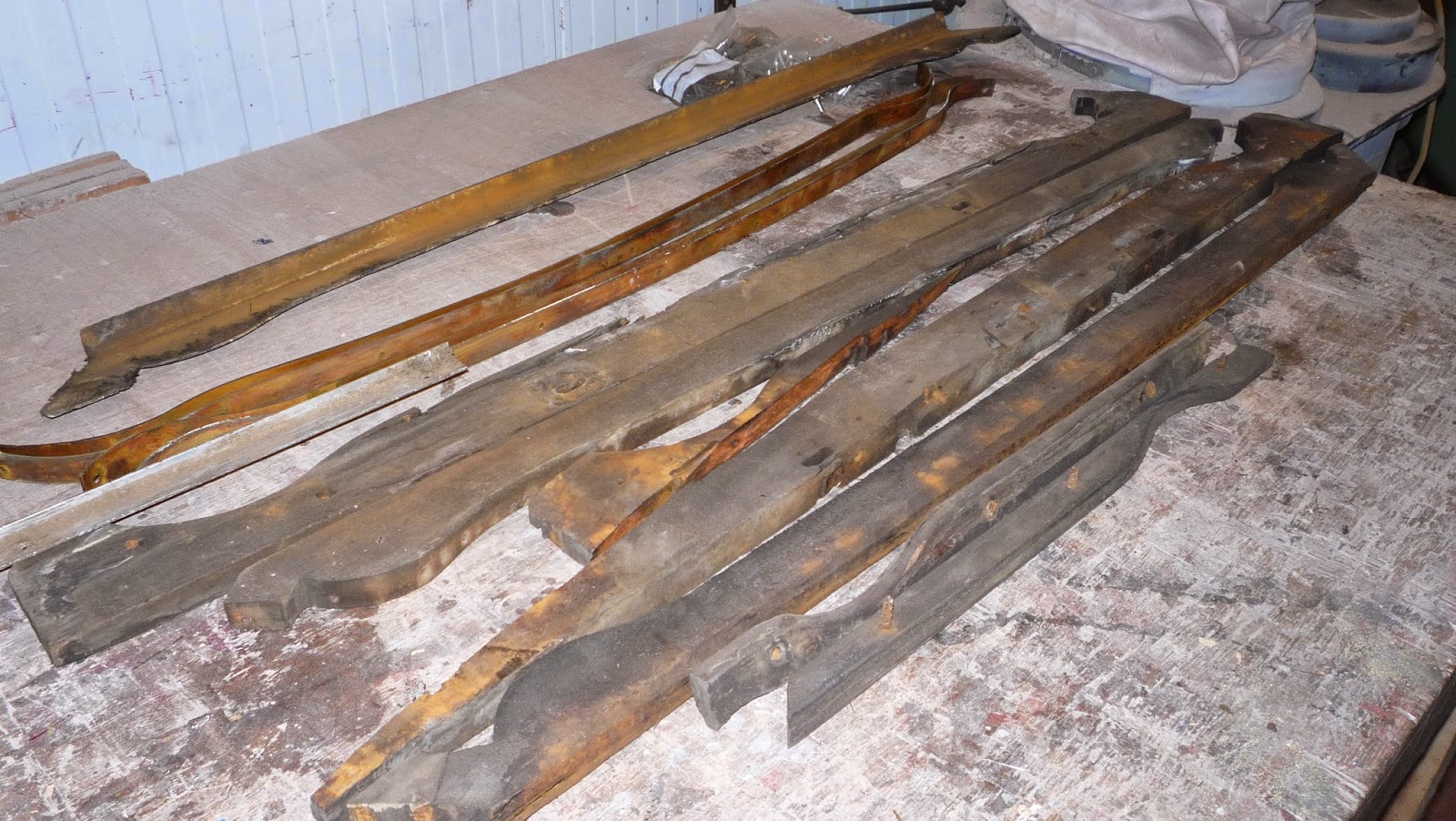 These are the pieces of the top vestibule door runners, all awaiting attention. 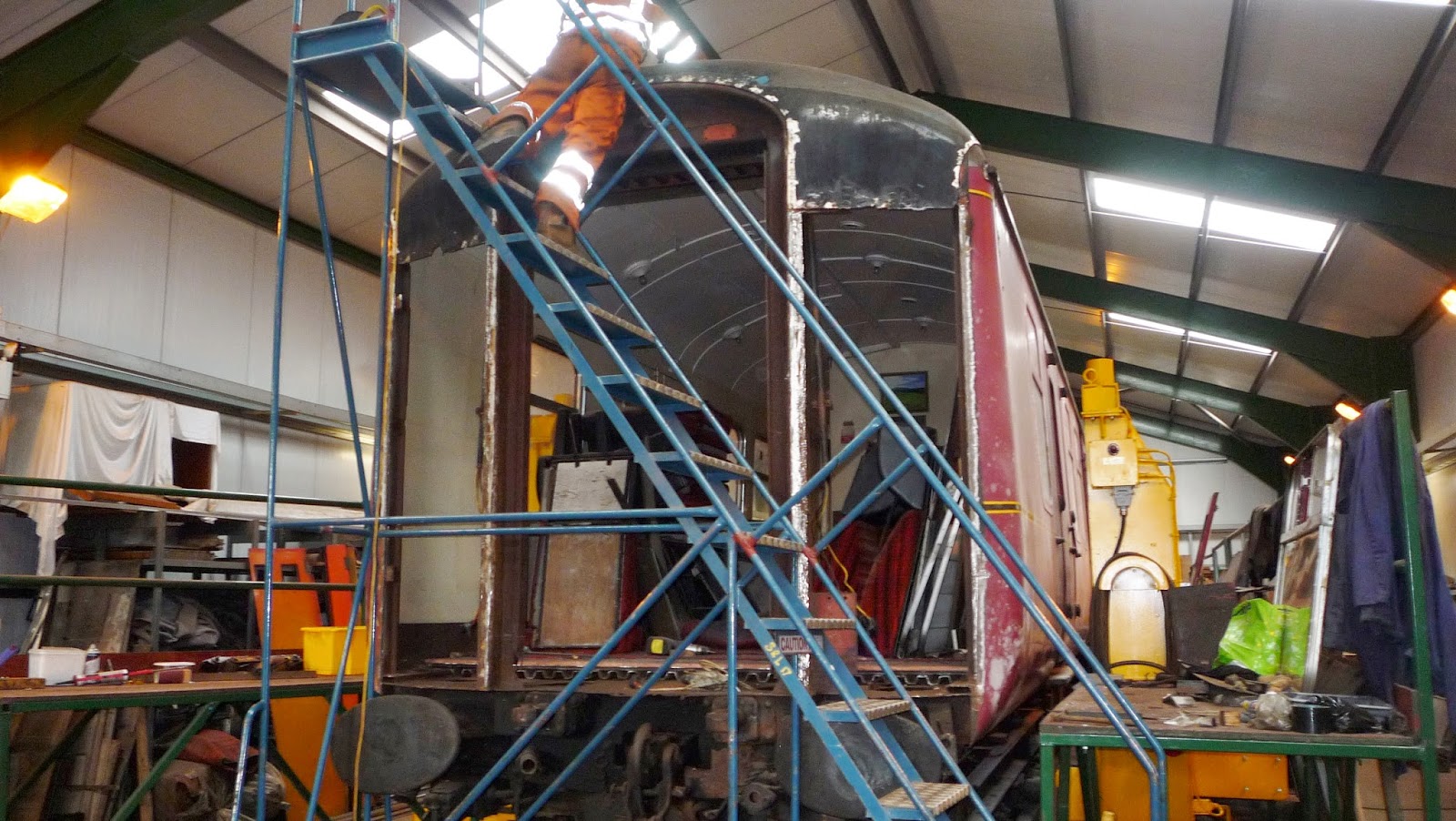 Richard attempting to remove the fixings that hold the fibre glass end capping in place. This vehicle will have to be used for the second train brake on the "Peppa pig" special days.  Mechanically it is in good condition, body wise it can be described as tatty.
No pictures but.... Mark 1 RU 1928 was shunted out of the shed last Tuesday 24th and brought to the shed.  It has been reported as smelling of gas recently, this coincided with the gas changing from one bank of bottles to the other.  We think that the problem lies with the change over valve, so this was replaced.  Whilst it was in the shed it received a new set of brake blocks, attention to one of the taps that has been leaking and a door internal lower step that had fallen off was replaced.
Posted by foxontour at 19:30 No comments: 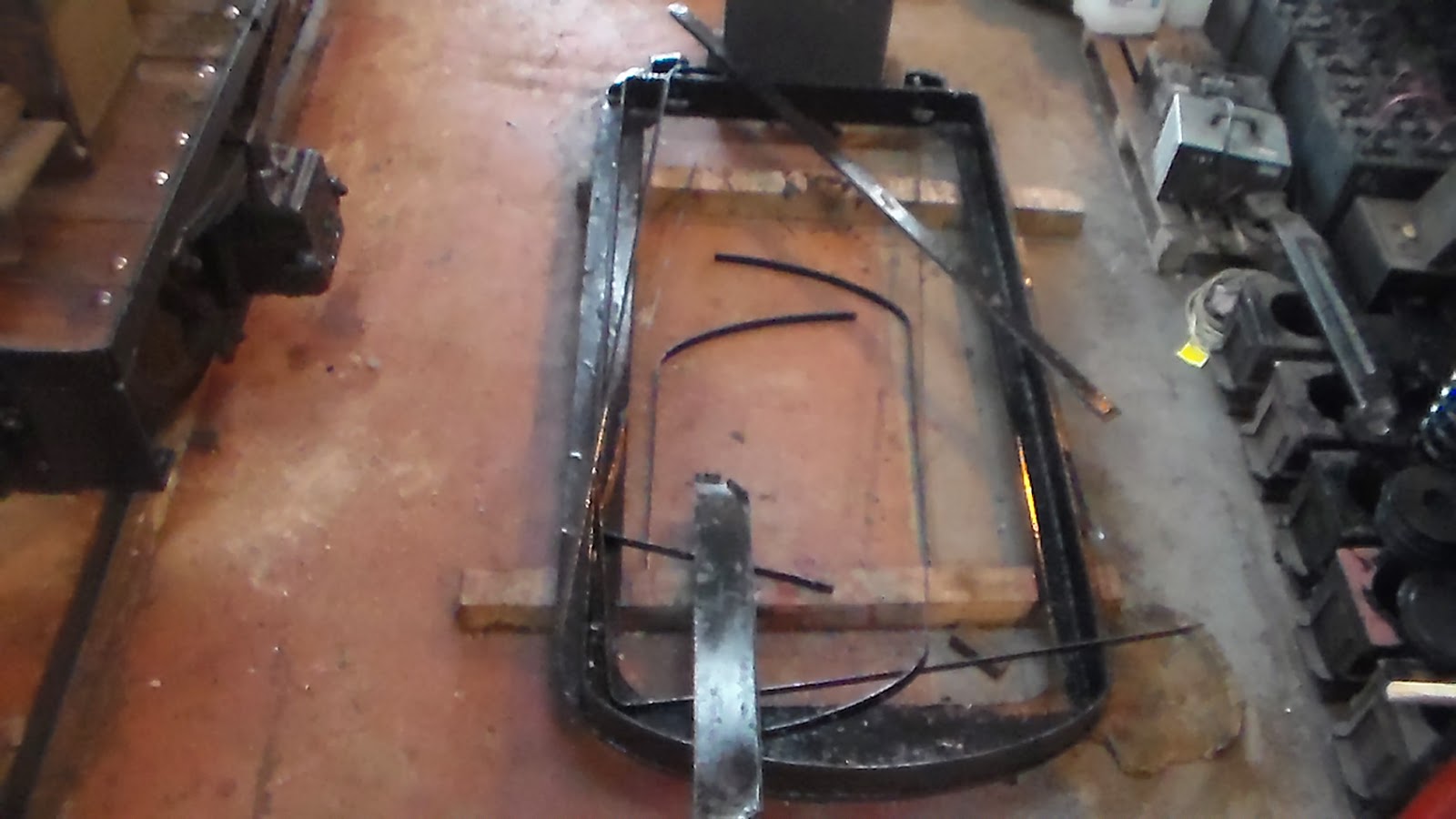 This is the corridor connection plate and associated metal straps, they have been cleaned up, primed and coated with black gloss in preparation for fitting.  Although no pictures, we are currently trying to fit the new rubber diaphragm to the end of the coach. 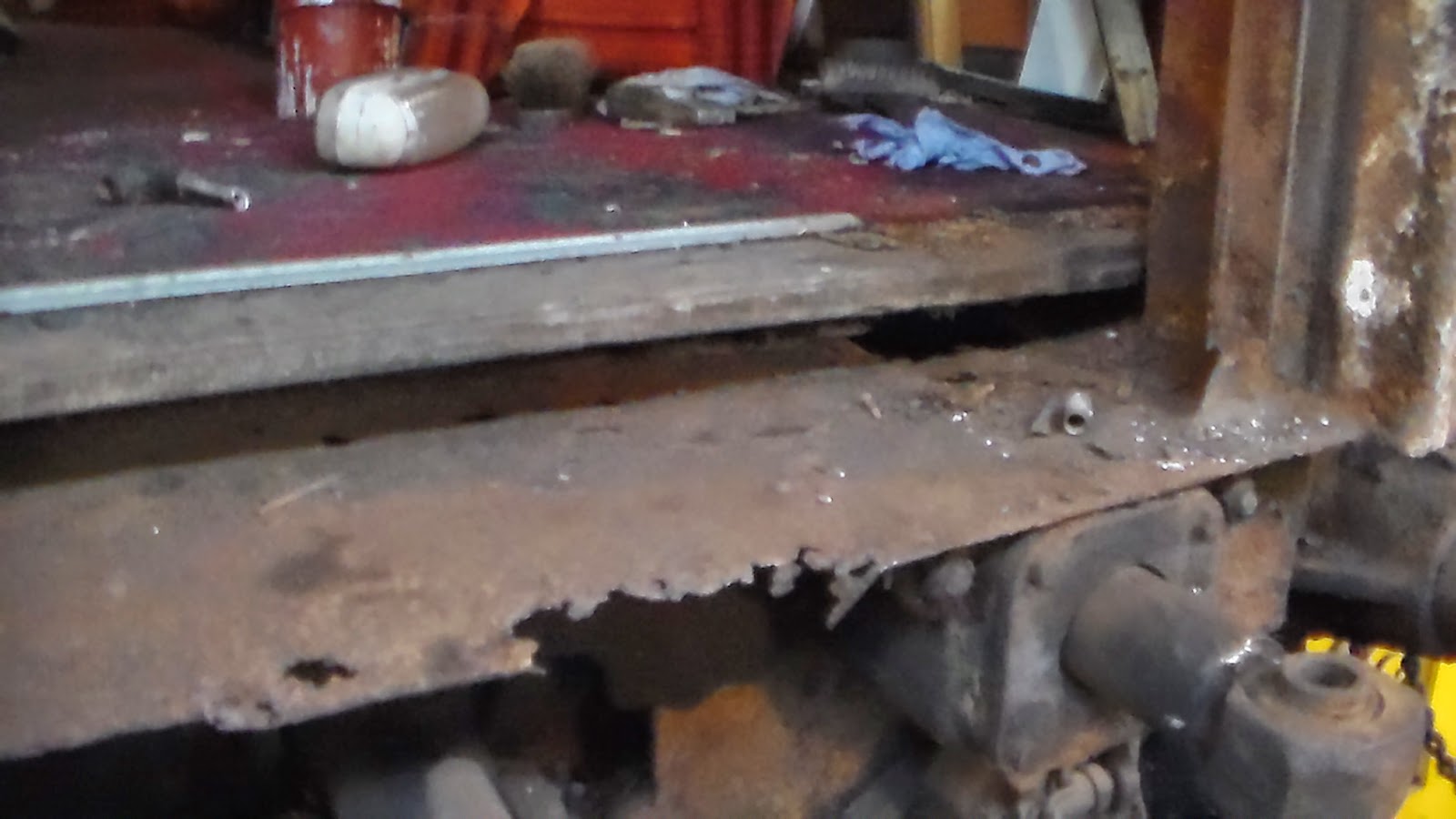 A start has been made on the other end, it is in a worse condition than the first with excessive corrosion. 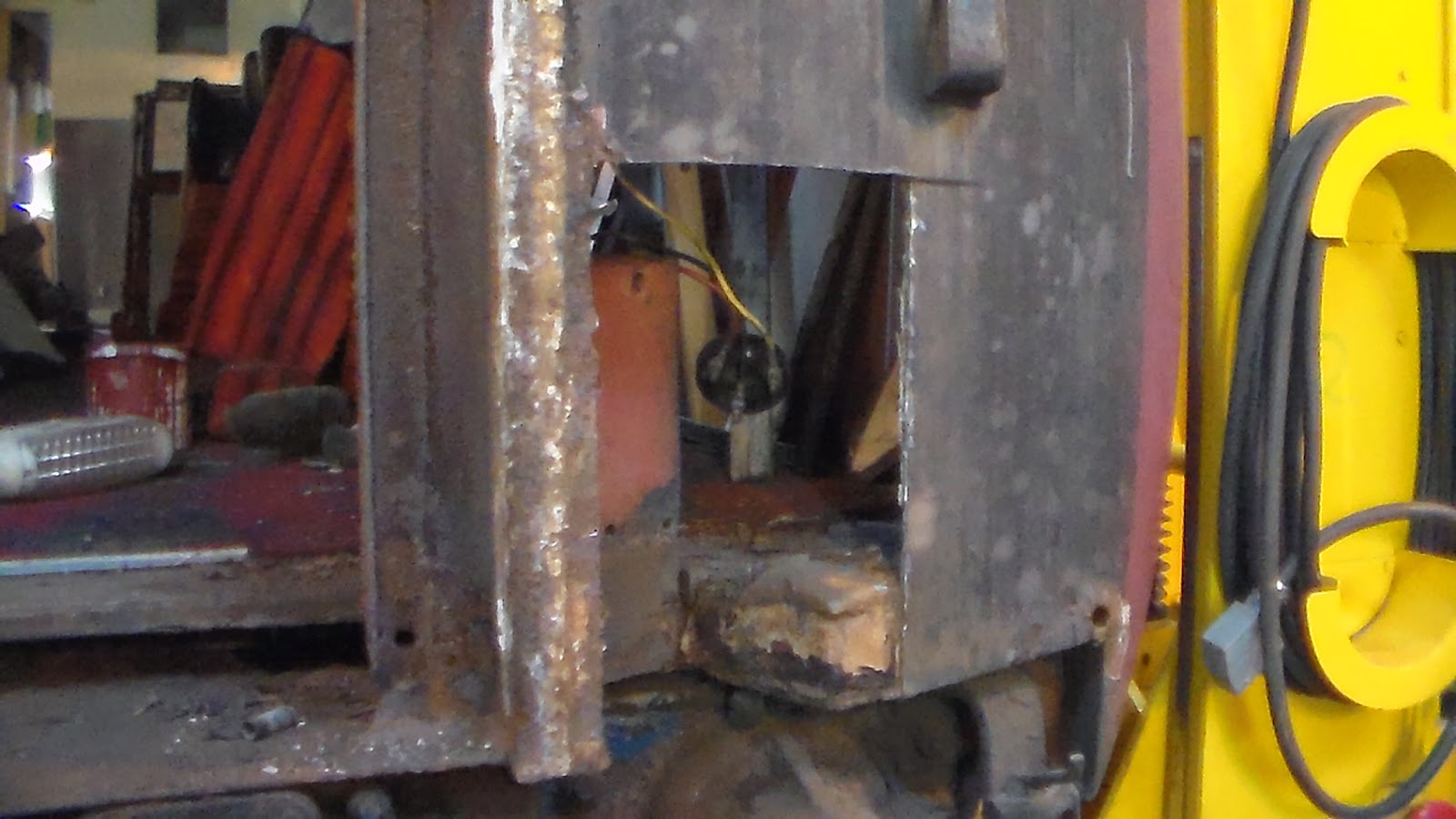 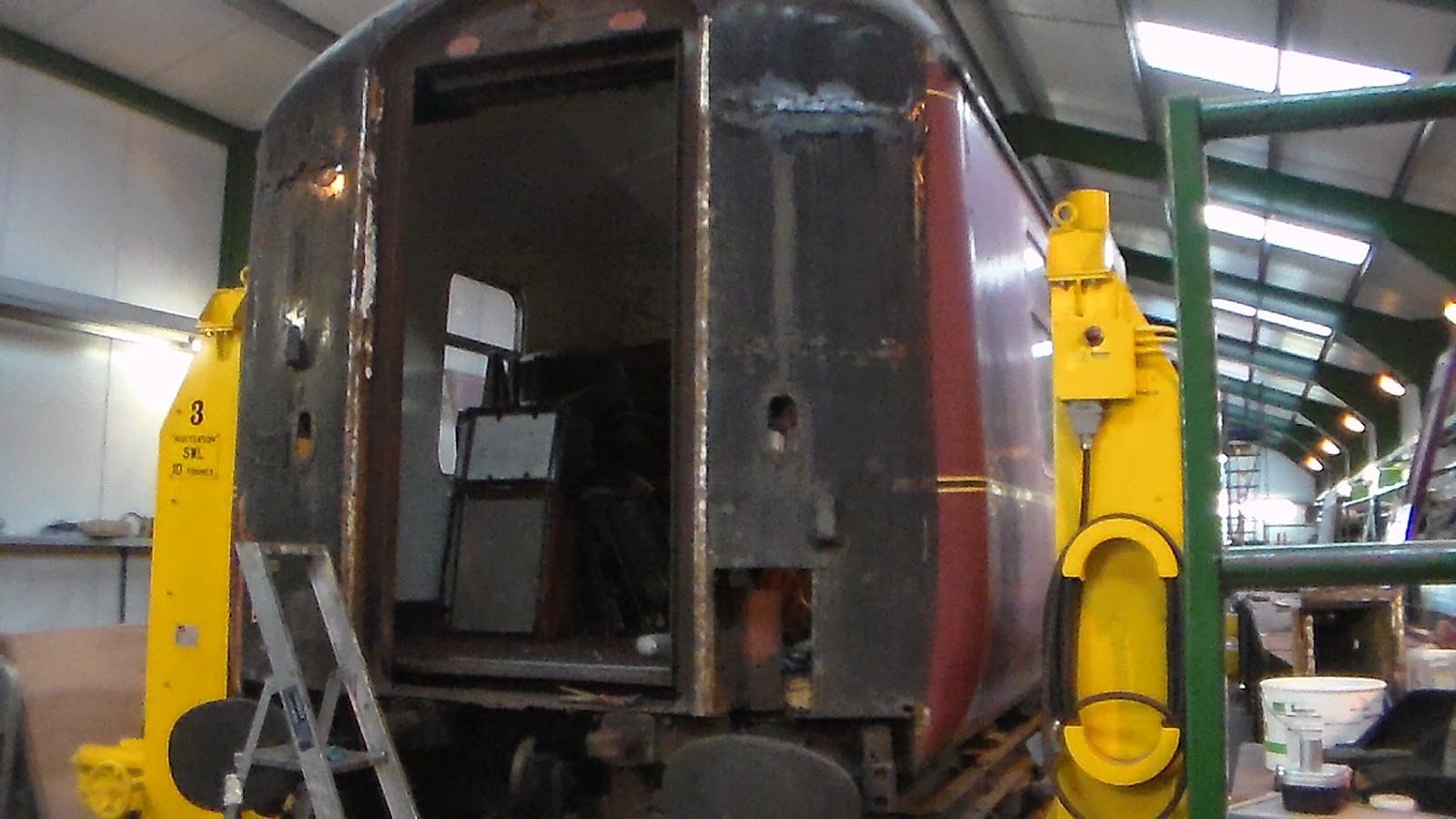 A general view of the end of the coach 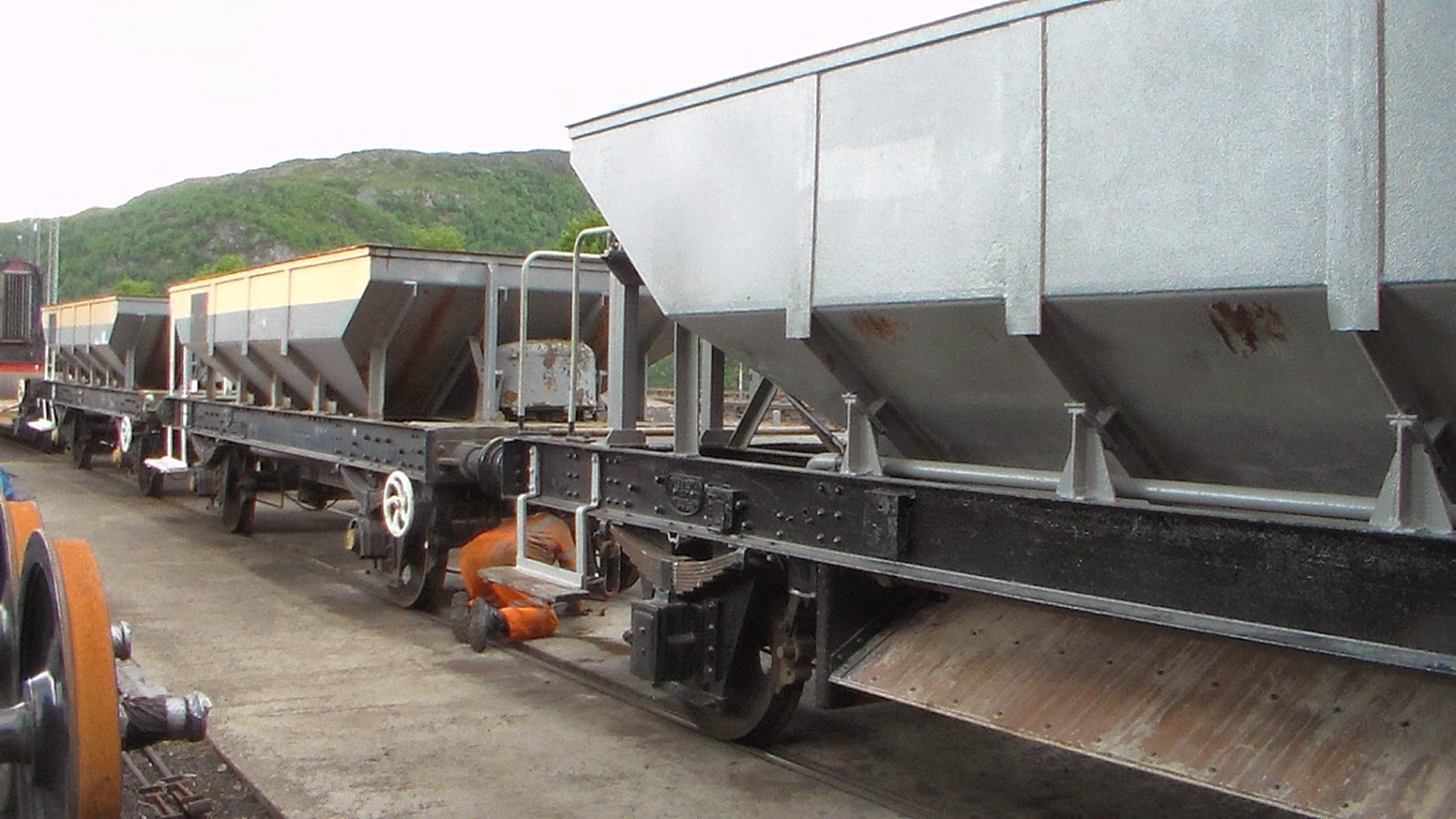 The ballast wagons are in demand at the moment with a fair amount of work for them on the extension.  Bill Dodds can be seen underneath one of the catfish wagons adjusting the brakes.  The two catfish wagons were turned on the turntable, although they only have a centre door, it points in one direction only and Georgie wanted them turned so that the stone was thrown in the other direction. 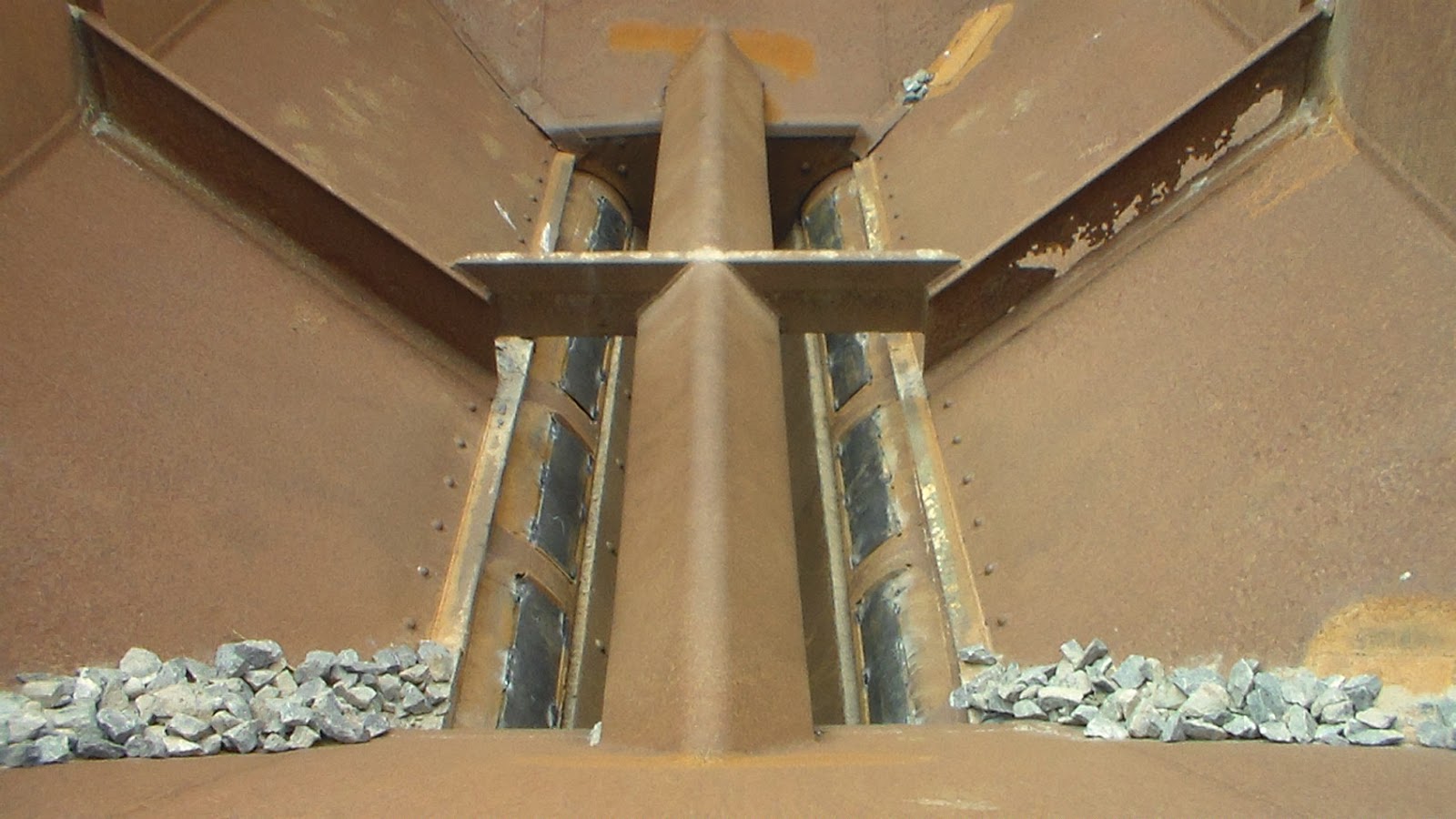 This dogfish wagon had been in for repairs recently, the two outer doors had been patched with steel plates.  Unfortunately these plates were flat and when the wagon was loaded with stone, the pressure on the flat area was so great that the door would not open.  This picture shows the attempt to correct this by the welding of curved 6mm steel plates on top of the flat ones.  The theory is that the doors now having the curve restored will be able to slide open against the pressure of the stone.  We await the results. 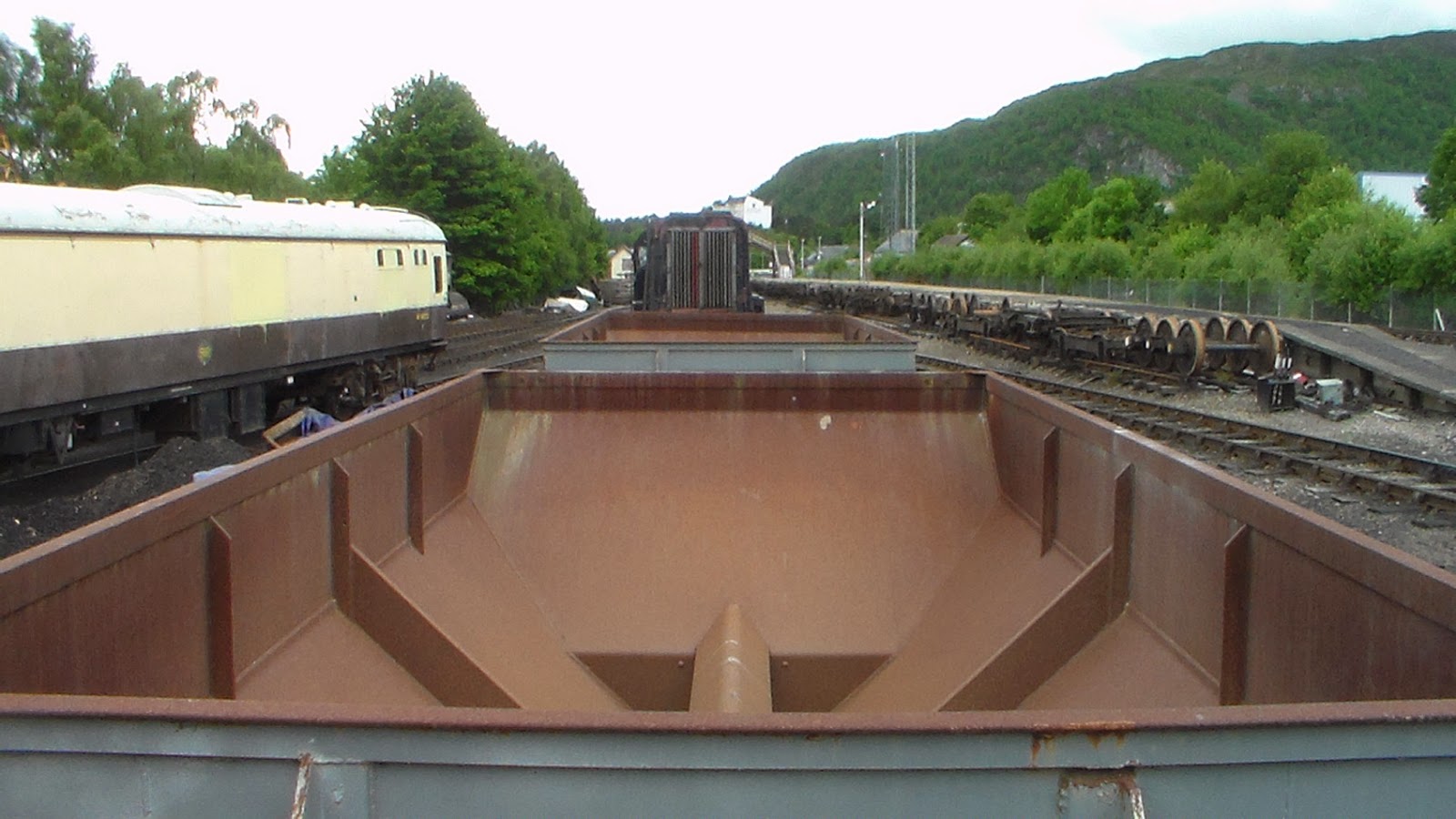 A guards eye view from the brake van. 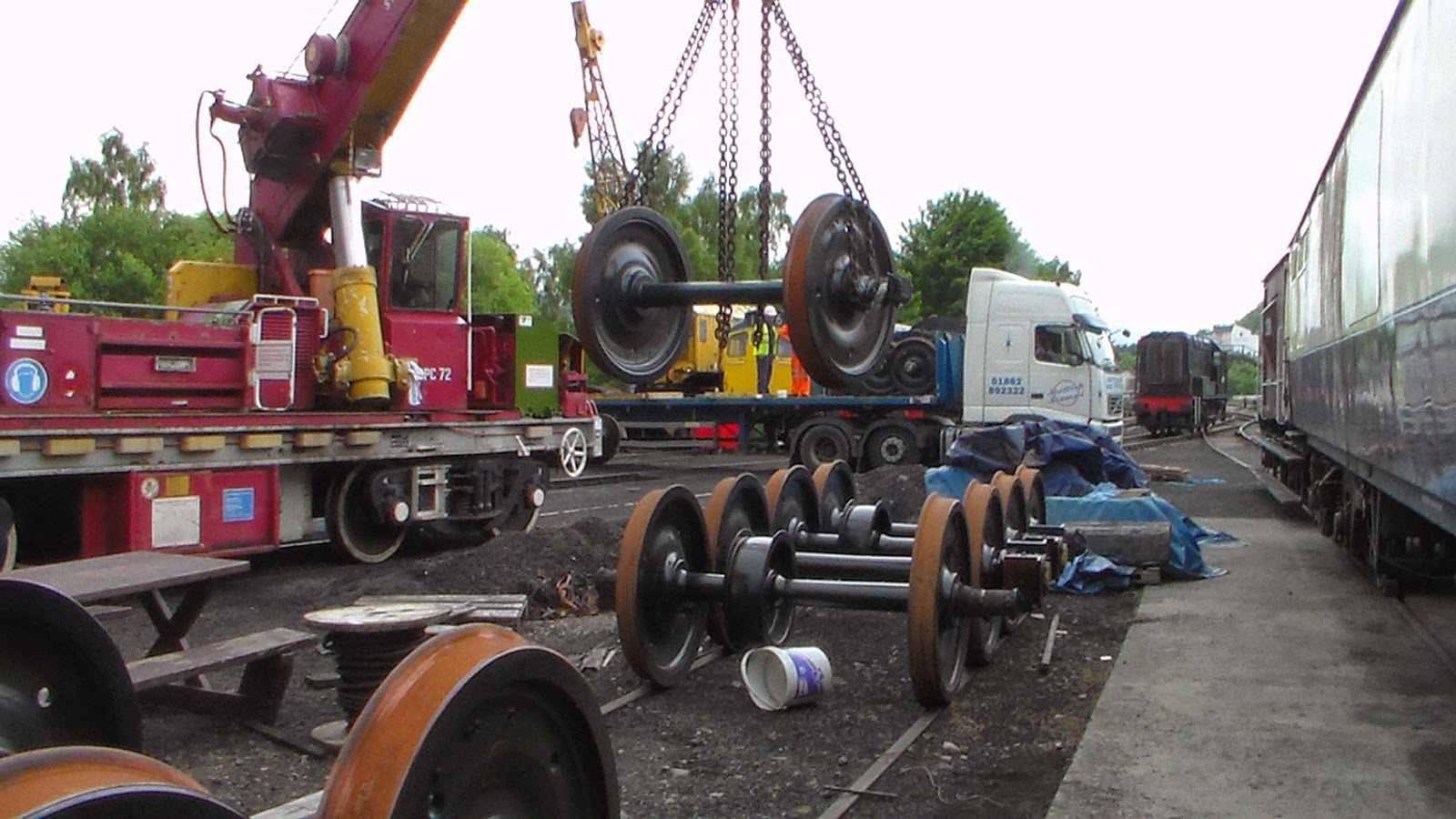 We dispatched six carriage axles last week for tyre turning, here we see the crane in action picking up an axle. 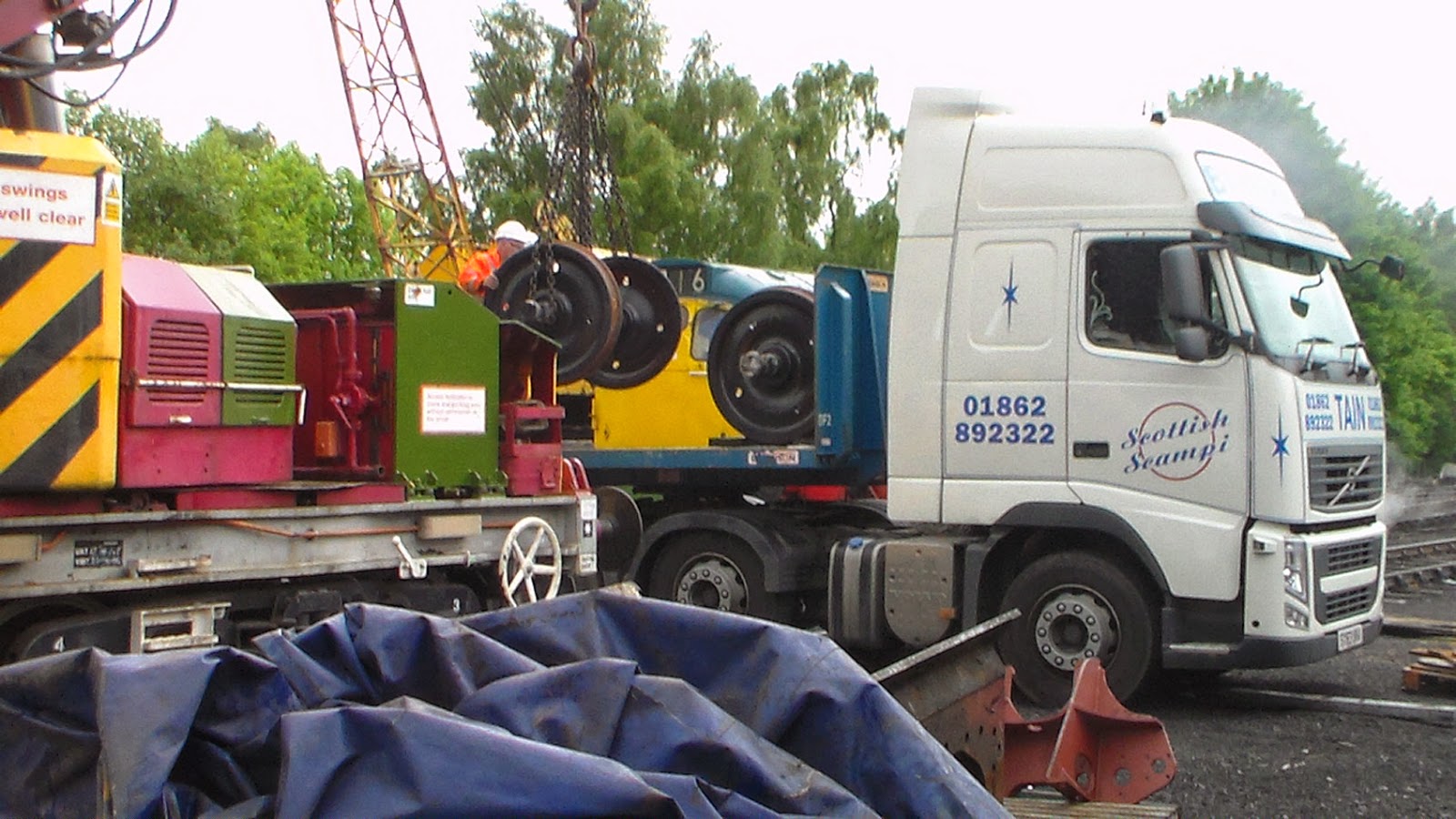 The crane then placing the axles on board the Bannerman's lorry. 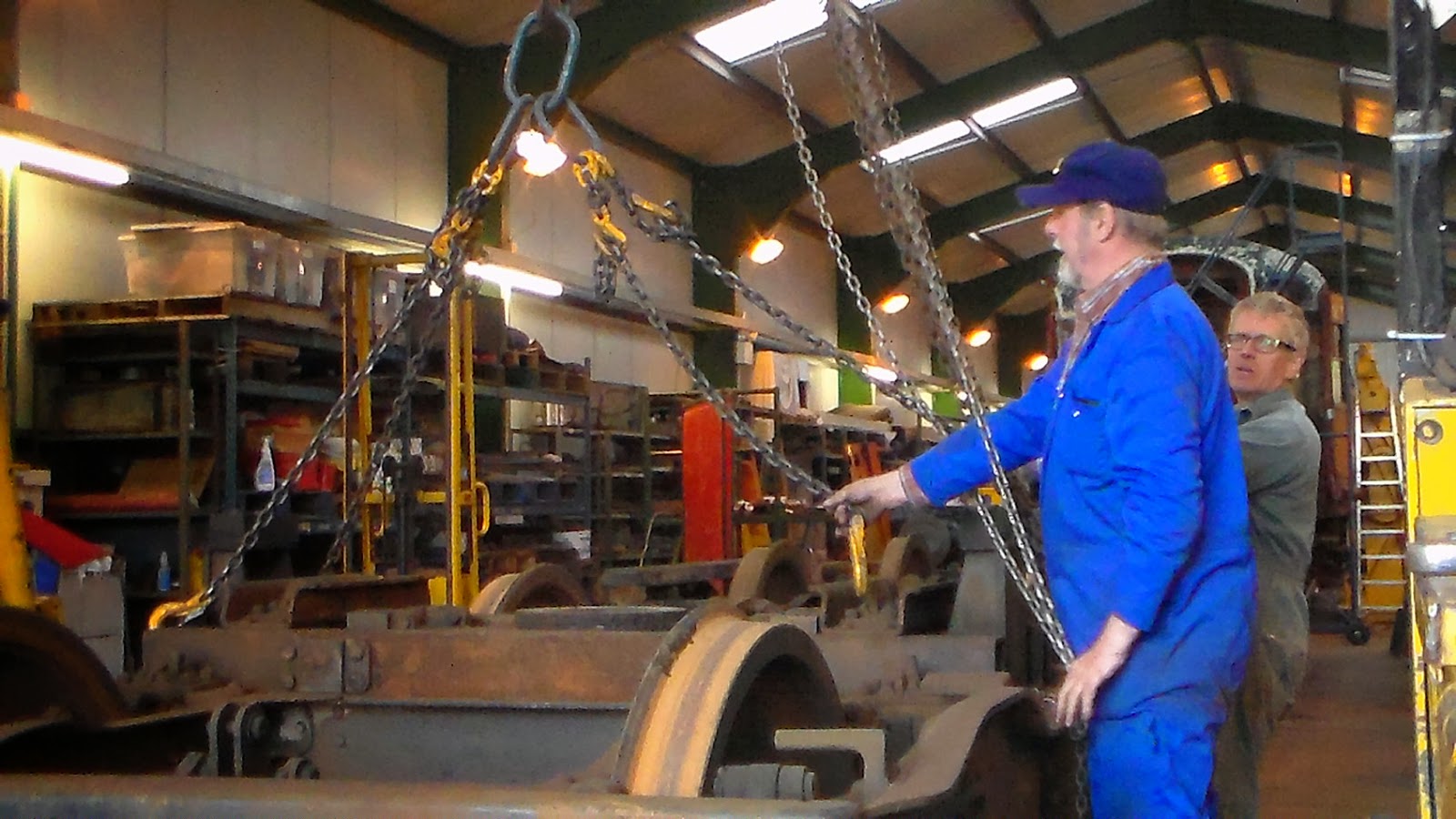 The Gresley sleeper that was pictured in a recent blog, was lifted to remove the bogies for axle swapping.  We are actively trying to find the vehicle a new home, however as it is a sleeper it is not going to run up and down a railway much in the future.  Therefore we are changing the wheel sets for some that are worn down but perfectly serviceable for a vehicle that will hardly ever run again.
Pictured here are Steve and Ralph removing the centre bolster from a Gresley bogie. 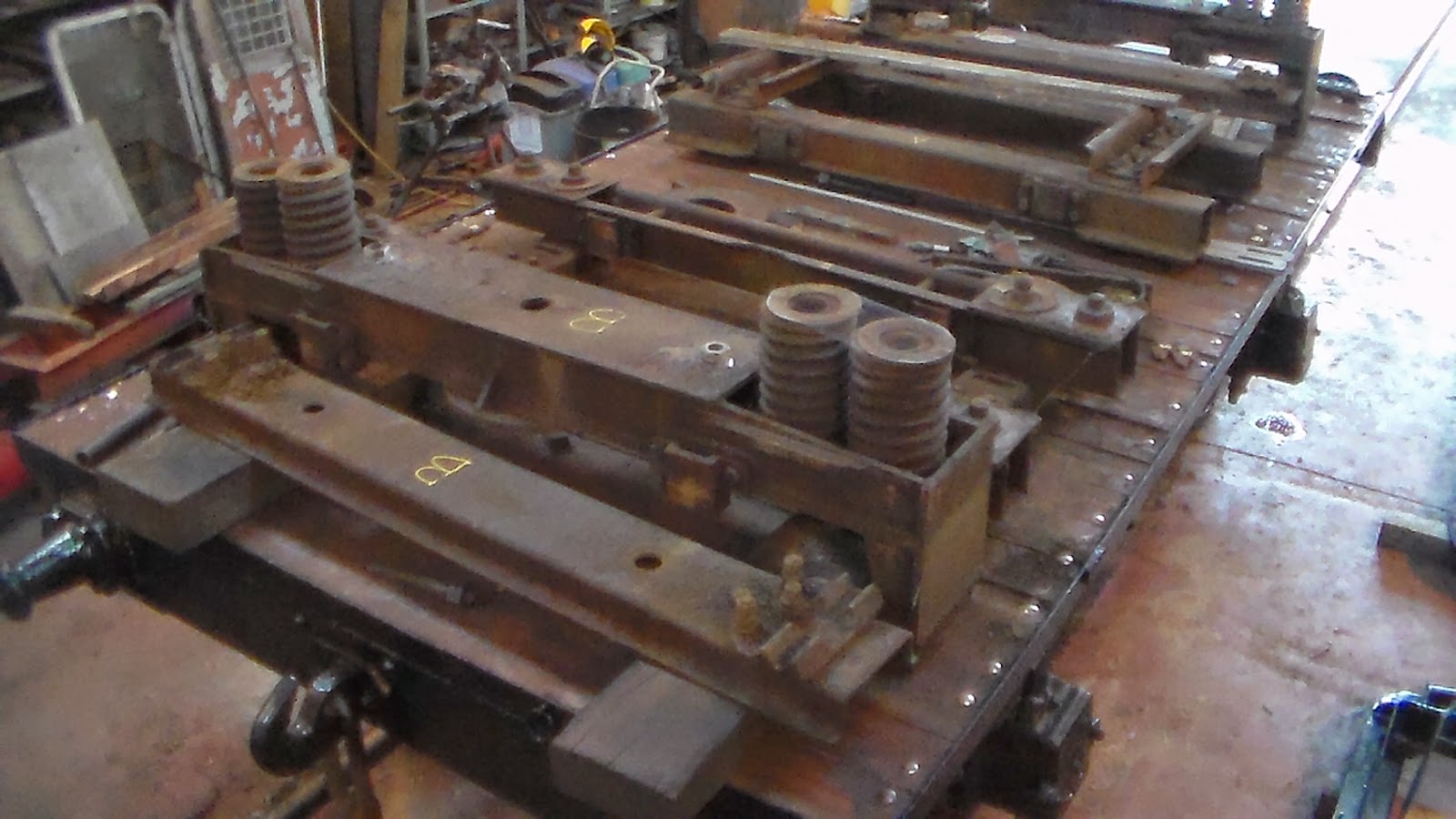 The bolster parts have been placed on wagon 46334 for storage, prior to sending away for shot blasting and subsequent coating. 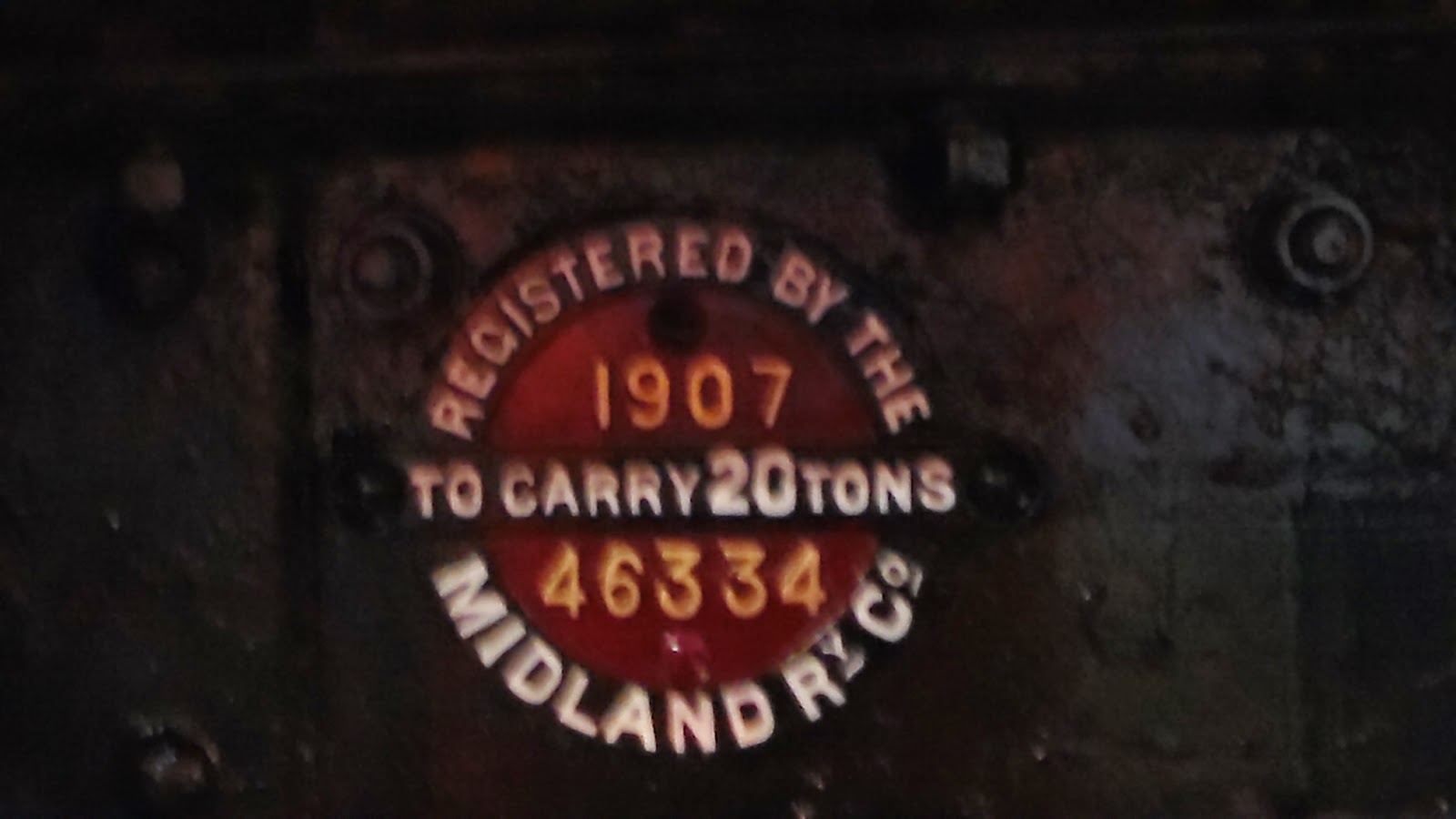 The plates from 46334 were shown after shot blasting in a previous blog, this is the finished, re-fitted plate 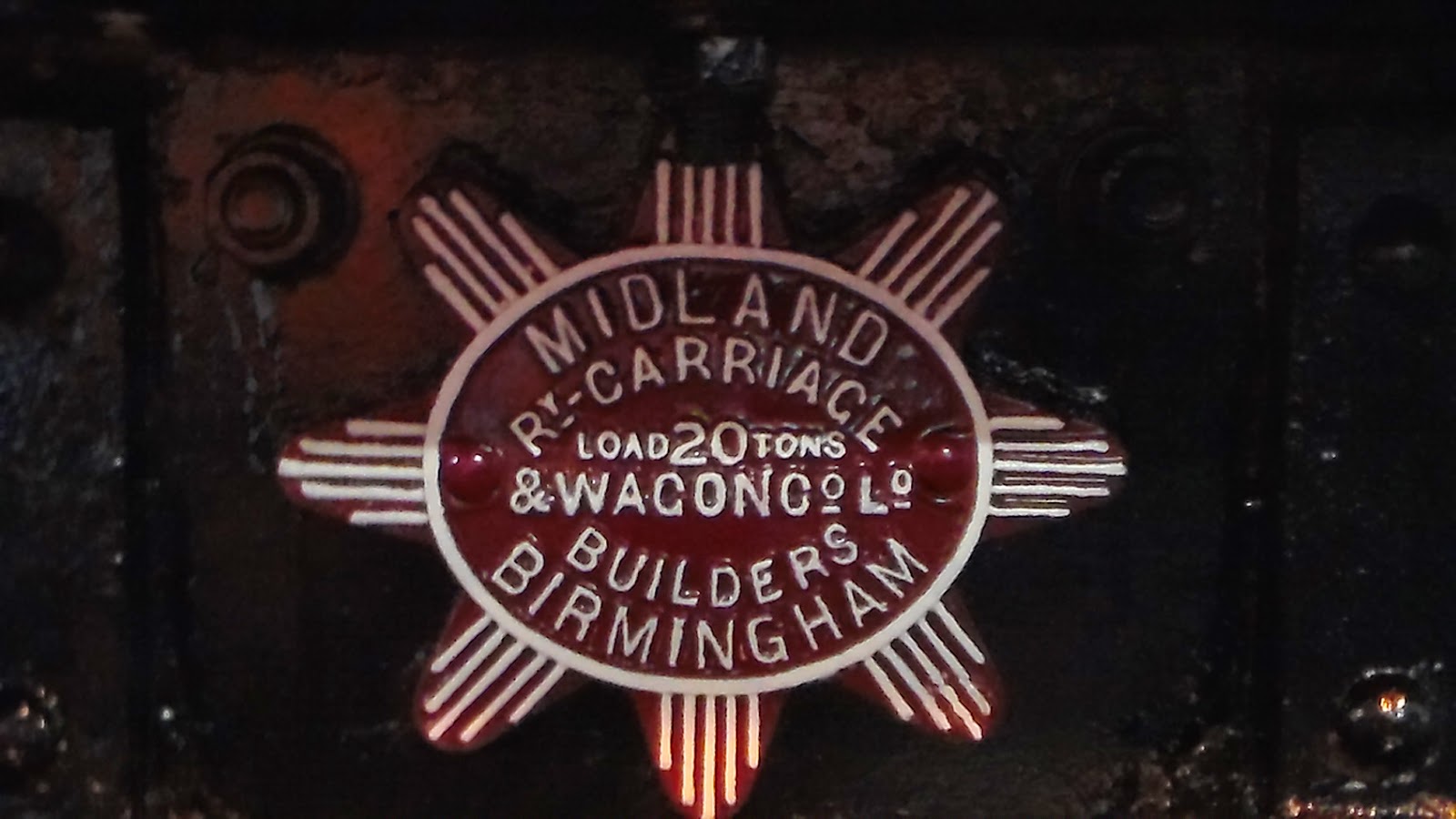 The other plate, finished and re-fitted
We have had the usual run of defects to attend to, some more urgent than others.  One of the best was the defect that said the toilet wasn't working, well guys (guards) if you don't fill the tank with water the toilet will never work.
Posted by foxontour at 20:06 No comments: