Work on LMS brake van 730214 continued throughout November and into December.  Here the end steel frame work is being replaced

At the other end the outer steel panel has been fitted.

A view of the end panel from the outside.

By the beginning of December the van had been painted.

Now outside, the steps having been fitted and painted white with a non-slip surface applied.

Side view taken from the signal box. 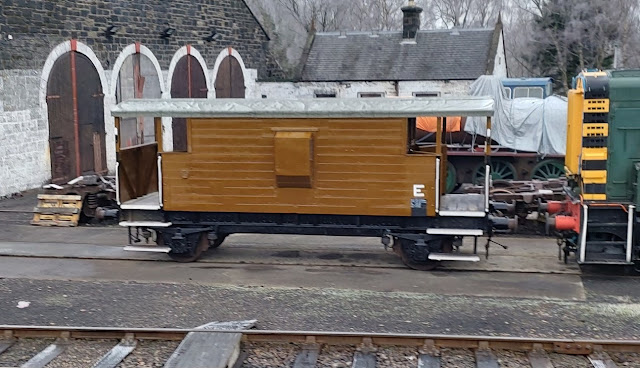 Mark 2 TSO 5149 had been taken out of service in October with a broken window.  It had been struck by a golf ball when passing the course at Boat of Garten.  Back in 2008 when this coach was overhauled a decision was made to single glaze the side windows that had become fogged, the resulting gap in the rubber channel being taken up with hard wood inserts.  Over time these inserts had shrunk and were constantly having to be re-fitted, therefore the opportunity was taken to order and fit a new set of double glazed windows, along with new rubber all round.

Pictured inside the repair shed, this side has already had its windows replaced, just the other side to do, plus while it is in the annual service will be carried out.

On RU 1936, Murray has chalk stencilled the numbers and letters ready for signwriting.

This one says Restaurant Car.

Posted by foxontour at 18:17 No comments: