A big gap in the post's owing to my holidays, work has been progressing, however no pictures.
During my absence 17101 had to be put to one side.  Because of a heavy shunt, the dining set had to brought into the shed, one by one, to be lifted to check the bogie centre castings.
As the running days have now receded as we head towards the end of the season, the opportunity was taken to repair some of the defects that have cropped up.  Windows not closing properly, battery problems where the catering staff have switched the lights on in the shed, then forgotten to switch them off when out in the daylight.
Back to 17101, again its one step forward and two backwards.  We had a close look at some of the doors and door pillars, deciding that as we had gone so far on this repair, we ought to put more attention to the door areas.  The result was that all doors were removed, together with four door pillars to have further attention and repairs.
The doors are made of fibre glass, into which has been bonded pieces of wood and metal strips to fasten the fittings to.  The water gets into these, causing the wood to rot and the metal to rust.  This ultimately causes the fibre glass to break out in large lumps.
A door under repair on the bench.  The fibre glass has to be cut away, new wood and metal fitted, which is then re bonded back into the structure. 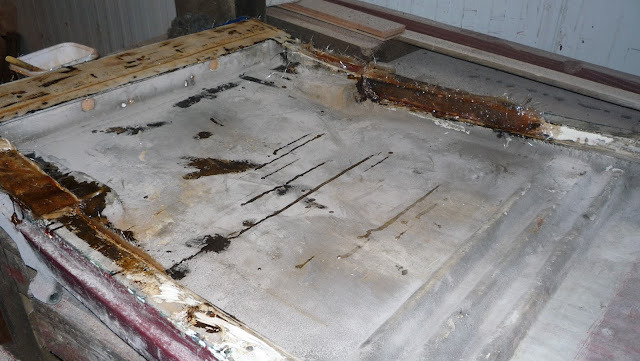 The seat frames and heating ducting have now been fitted to the two remaining compartments. 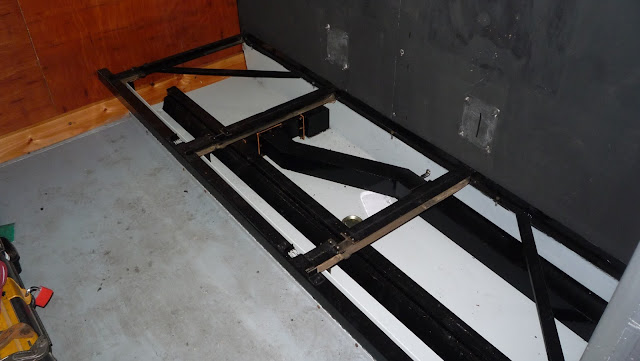 Another compartment pictured below. 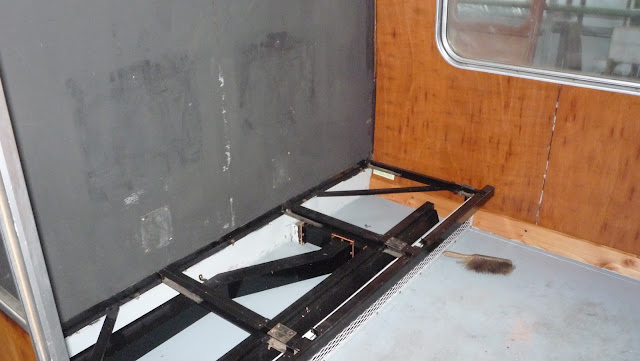 The new panelling in all four compartments has now been completed with the application of the final coat of varnish. 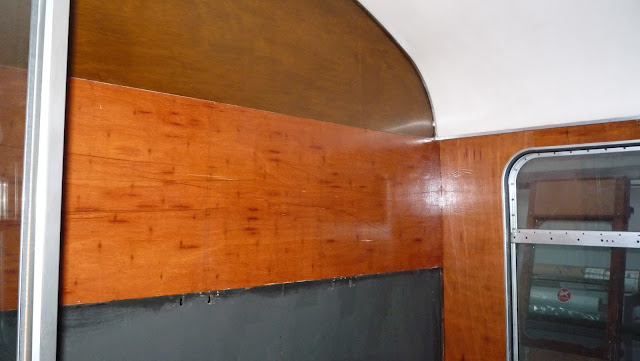 Progress has now moved on to the fitting of the seats in the first compartment.  Here the arm rests, which have been recovered with black vinyl, are being fitted. 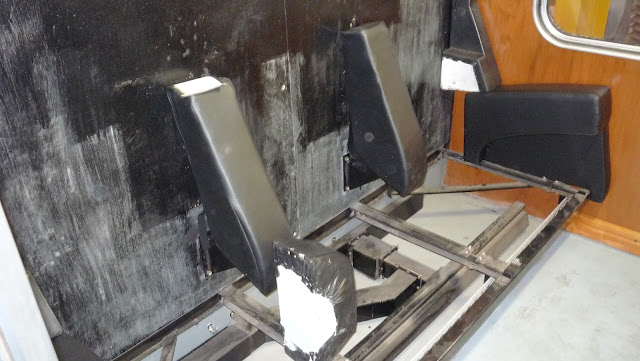 Another view from the opposite side. 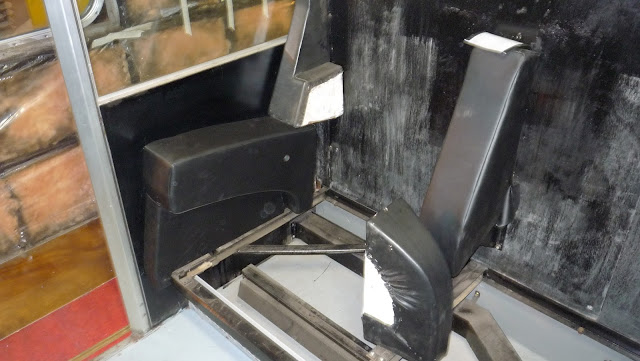 Bill giving a compartment sliding door some attention.  They have black vinyl glued to them which had bubbled and peeled off.  Here it has been removed leaving the glue behind, which is being tackled with a solvent remover. 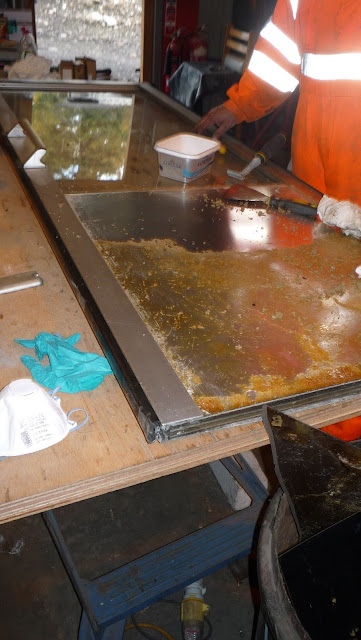 The guards compartment is progressing well. 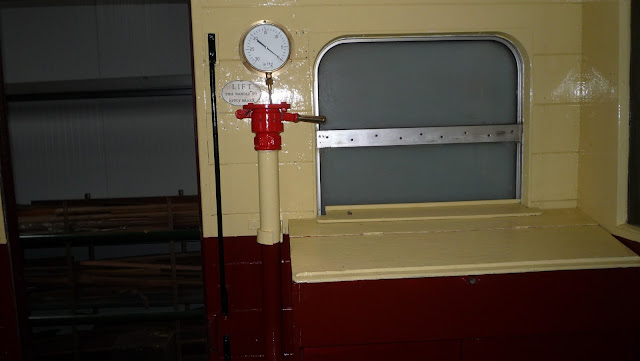 The floor inside the Guards compartment next to the in-swinging door has been repaired and covered with aluminium check plate for additional wear resistance. 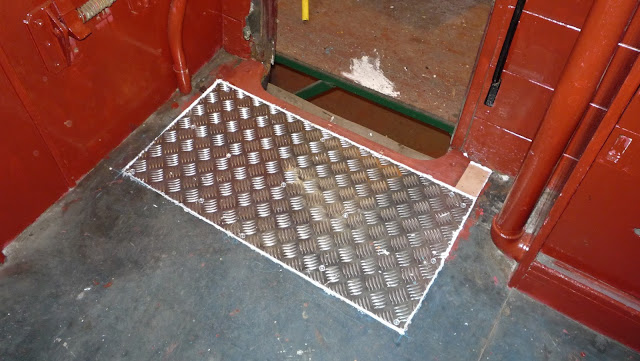 The floor outside the Guards compartment, in the corridor has been refitted. 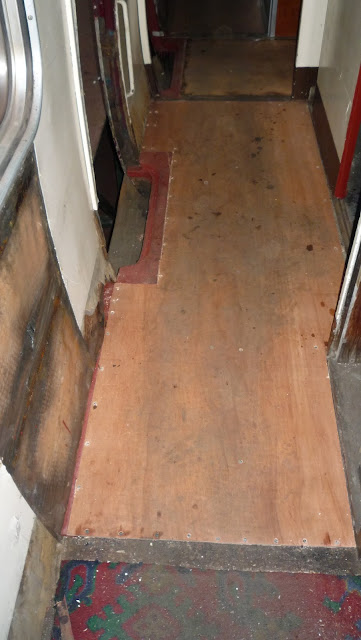 Bill working on the toilet pipework.  We took the coach outside and filled it with water to check for leaks.  More one step forward and two back as the filler pipe housings leaked on both sides, as these were behind the fibre glass end panels which we had refitted, they had to be removed again.  The other problem was the flush mechanism which keeps leaking despite many attempts at sealing. 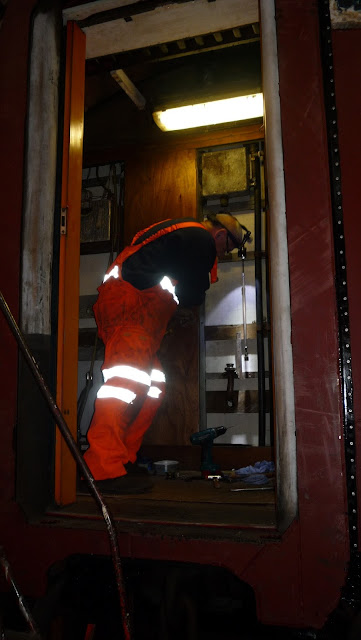 The weed killing wagon showing the wooden floor has been fitted.
﻿ 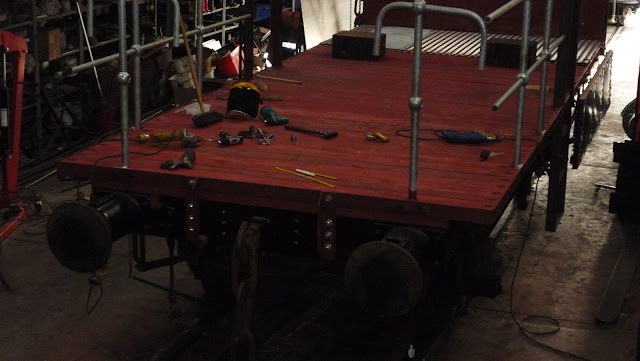 A close up of the corner. 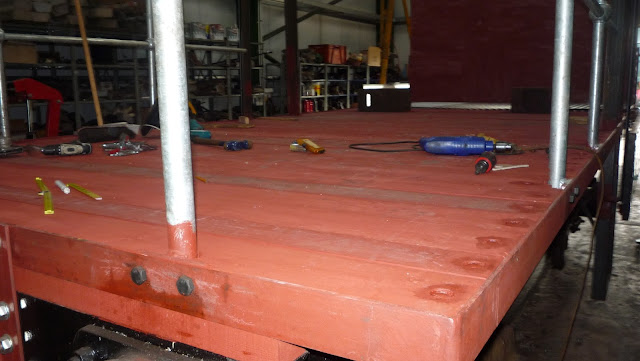 A few days later and the aluminium checker plate floor covering has been fitted over the wooden floor. 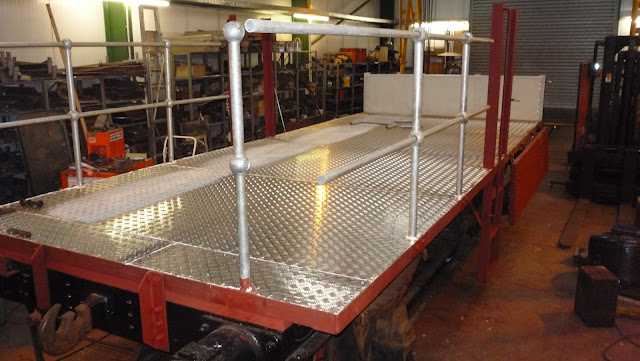 Andy visited us from Edinburgh, spending the week applying firstly primer, then undercoat and finally a coat of gloss grey paint. 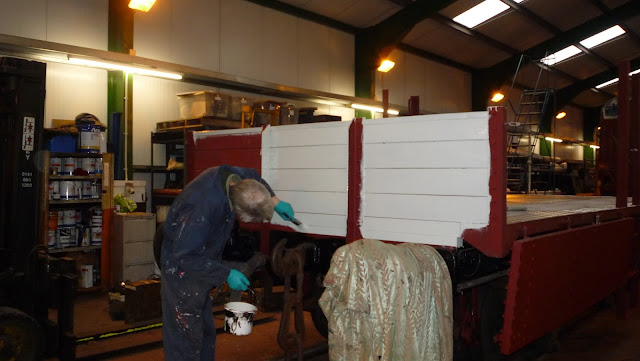 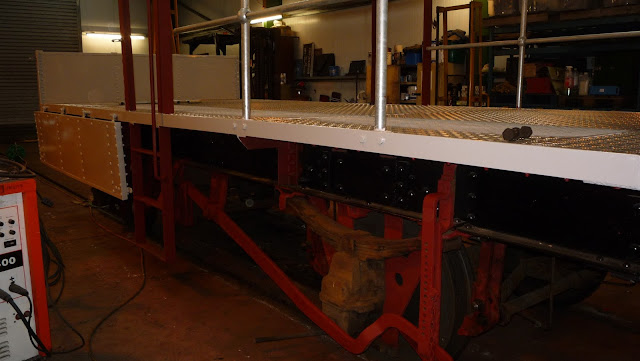 And by the end of the week.﻿ 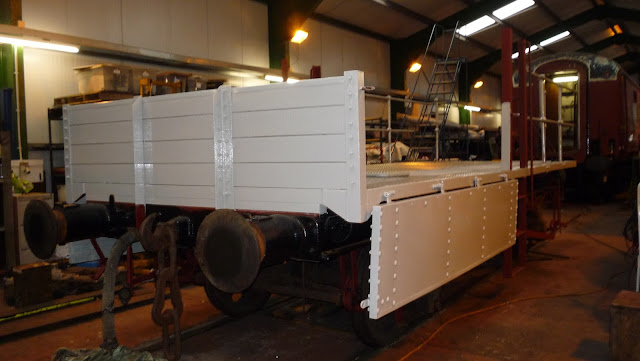 A picture by Neil Macqueen, copied from the p-way blog showing the dining train in action on Sunday 06th September, with me as the fireman looking out for the camera. 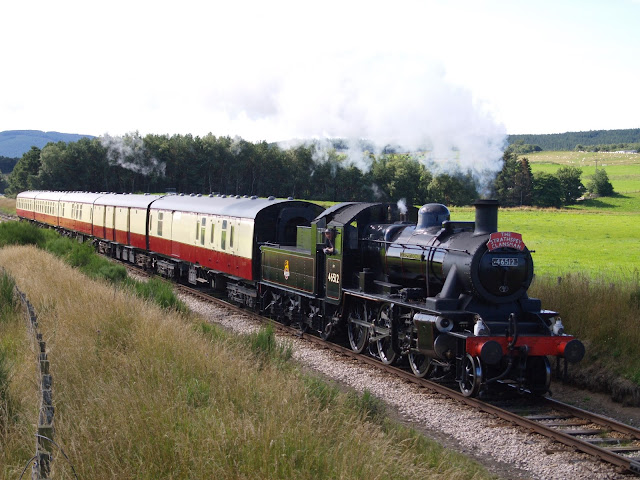