Progress on mark 1 RU, has been steady, held back by the need to do repairs on the service set prior to the Christmas running.
Here we see the corridor that runs along the outside of the kitchen. The plywood floor has been secured in place, followed by the placing of the aluminium checker plate on top.  All of the joints have been sealed with simpson IR70-03 sealant to make them waterproof. 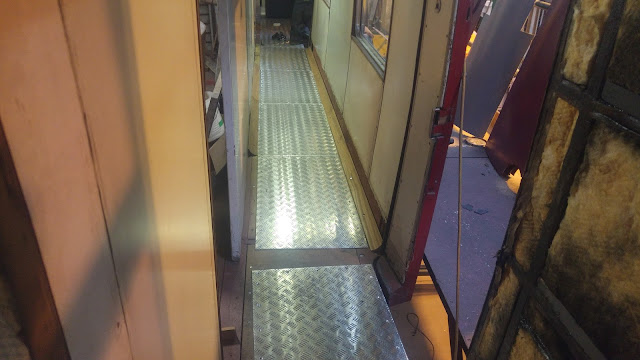 On each side of the corridor there are blocks of wood.  These are triangular in shape with the hypotenuse being machined out to a concave shape.  These are screwed in place to support the aluminium kick plates that finish off the floor. 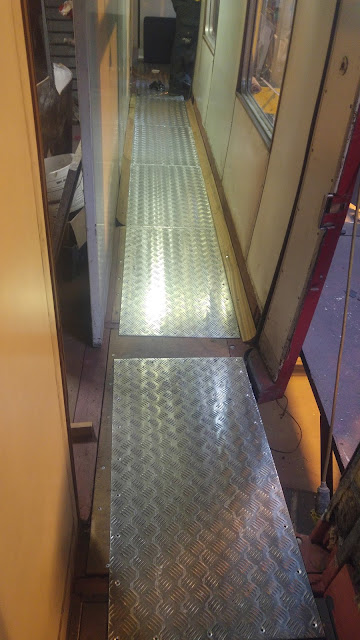 This is the finished floor area around the outside of the former staff toilet. 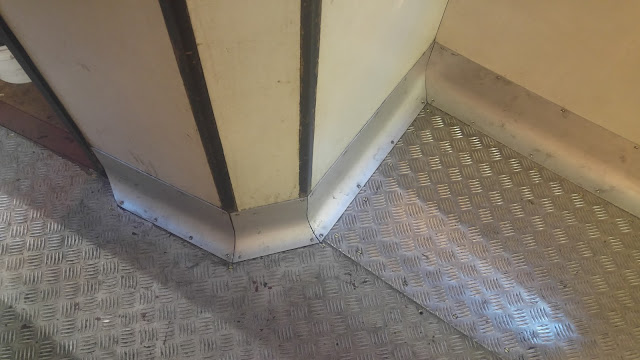 The corridor with the outside edge completed.  The gaps on the right are for the sliding door runners, apart from the one in the centre which is where the former serving hatch was. 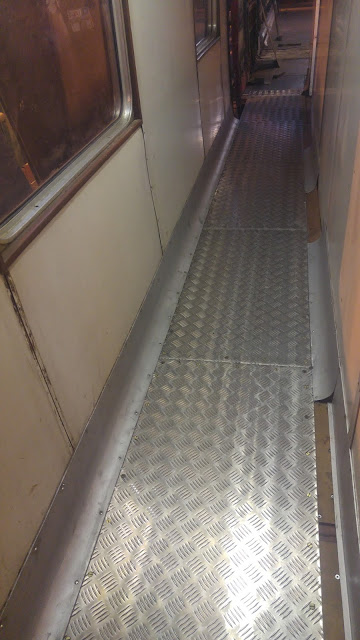 At the saloon end the aluminium step which forms the corridor connection, has been fitted into place. 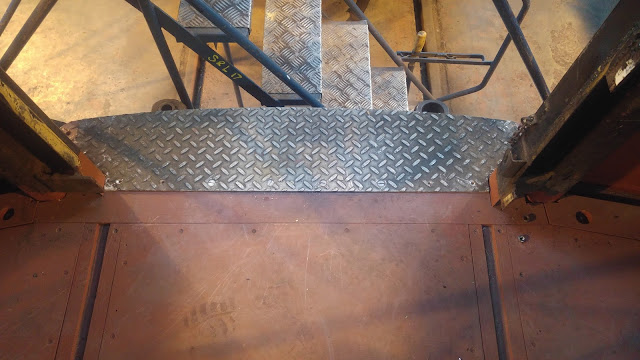 On the roof the vents have been removed.  The sealant that these sit on was found to have broken down badly and was allowing water to enter. 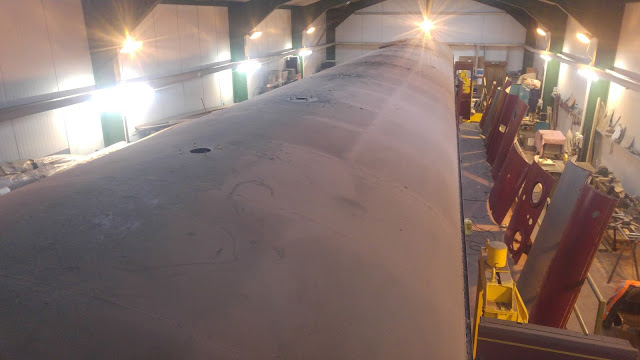 A close up of the vent opening.  The vents will be shot blasted and painted, the insides will be filled with fibre glass, aparently this is the recognised way to stop any damp getting in.  They will then be re-fitted using the rubber solution and new gaskets. 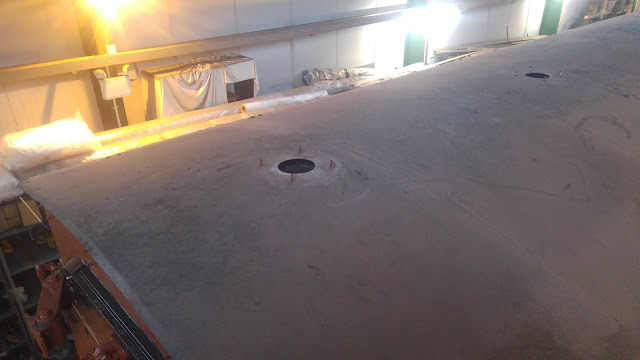 Mark 1 TSO, 5057 had to come into the shed to have urgent steam heating pipe repairs.  While it was in Bill tackled some of the threadbare armrests and side cards.  Below are some of the worst ones that were removed. 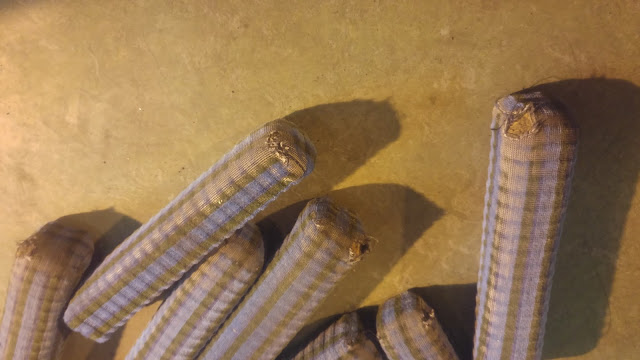 The picture below shows how many times the armrests have had to be repositioned.  Each hole was plugged with a dowel that had been coated in pvc wood glue and then hammered into the hole.  The next day when the glue had dried, the dowel was cut of and sanded flush with the arm of the seat. 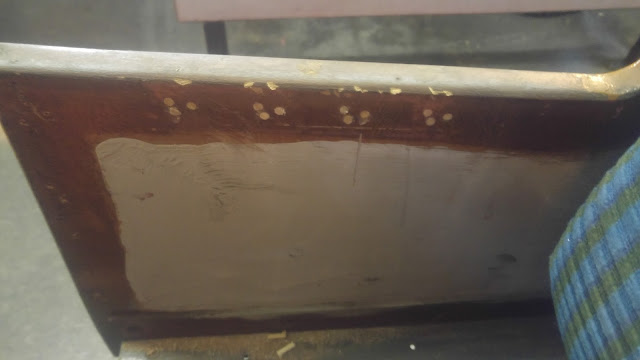 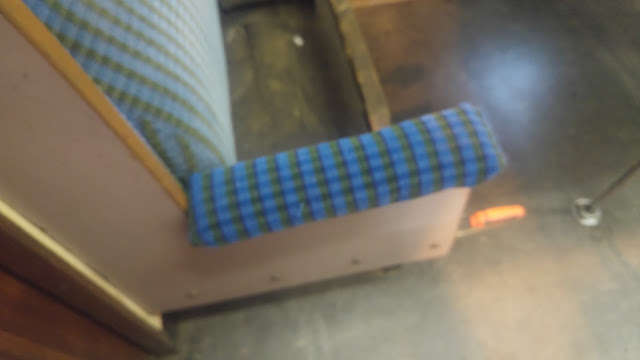 The view from the inside showing the re-covered side card as well as the armrest. 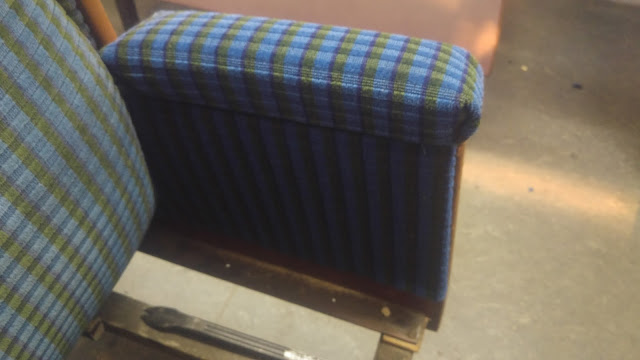 The North British shunter which had been in the shed for painting was finally outshopped.  Pictured here on the shed exit track. 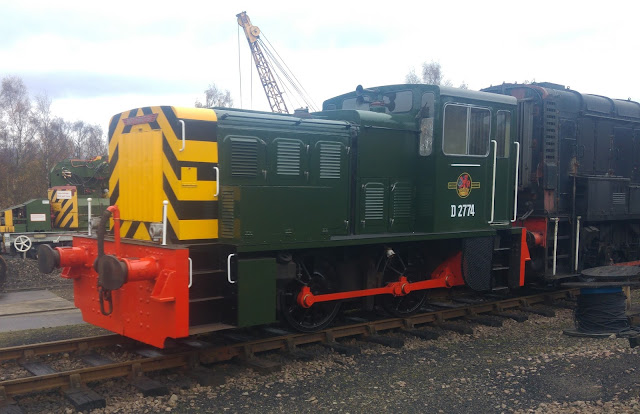 Posted by foxontour at 22:01 No comments: